In May of 2010, SLATERPAULL Architects purchased Engine House No. 5, from the City and County of Denver with plans to adaptively reuse the 1922 building to serve as the firm’s corporate headquarters. The historic building was transformed into a high performance sustainable office space and is one of the most energy efficient, adaptive reuse projects in Denver. SLATERPAULL’s design solution for the new office blends the historic character of Engine House No. 5 with a flexible, collaborative work environment. The 13,000 square foot building is listed as a contributing building in the Lower Downtown Historic District, listed on the National Register of Historic Places in 1989 as well as a local landmark district. The building received LEED Platinum Certification from USGBC in 2011.

Here is an image of the SLATERPAULL Architects building, courtesy of Doors Open Denver. 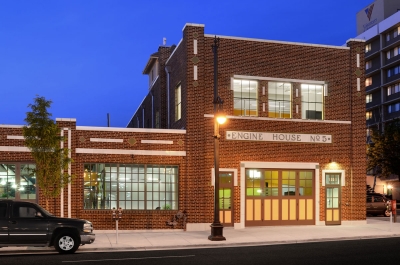 The structure has been modernized with sustainable, energy-efficient design for LEED certification, but its history is preserved in the original exterior brick and terra cotta, old firefighters lockers, and eyebrow roof. Since construction, the building has remained in continuous use and throughout its life as an Engine House and later a lineshop, the building has retained a great deal of historic integrity throught configuration of spaces and both interior and exterior finishes.

The Lower Downtown Historic District, of which the Engine House No. 5 is a part, is a cohesive collection of late 19th and early 20th century buildings which form the original wholesale and warehouse district of Denver. The District was formed in March of 1988 to encourage the preservation and vitality of the area’s significant contributions to the City of Denver’s growth. Its status as a historic district granted protection to the remaining buildings in the neighborhood, which only represent a portion of the buildings originally in the area, many having been demolished throughout the 1960s and 1970s.

The use of Engine House No. 5 by the Denver Fire Department demonstrates its historical importance and contribution to the neighborhood. Having served the community for years, it is essential to retain not only the building, but also its historic appearance as part of the fabric of the community. SLATERPAULL Architects’ project of adaptively reusing the building addressed critical deficiencies in the exterior masonry and terra cotta on the building, including reconstruction of an original eyebrow roof at the east end of the south elevation. Reconstruction of the feature helped to aid in bringing the building back to its original appearance. Combined with other innovative shading features, this project contributed to the integration of an innovative energy efficient design in a historic building rehabilitation plan.

The building is conditioned with chilled-beam technology, and an ultra-efficient radiant heating and cooling mechanical system combined with under-floor fresh air distribution. The raised floor allows for concealed routing of power, data, and ductwork, allowing the workspace to remain flexible and collaborative. Individuals have control over their air distribution with operable floor vents throughout the studio. The specified ventilation system, air circulation method and healthy material selection, such as low VOC paints and minimal carpet, improve energy efficiency, enhance air quality and reduce pollutants and cross contamination in the office space. Generous restored windows, skylights and daylight sensors allow for the lights to be turned off throughout the office the majority of the day. The result of these features is that the building uses nearly half the energy of a similar building of this type.