The cornerstone was laid on January 24, 1909, the first service was held in November of 1911, and the Cathedral was consecrated in June 1925. This structure became the largest gothic style church from San Francisco to the Mississippi. Saint John’s Cathedral was designed by Tracy and Swartwout, New York, as a result of a national architectural completion held in 1903 in which eighteen architects competed. The nave is constructed in English Gothic tradition of Indiana Oolite limestone and the dimensions are 130 feet long, 51 feet wide, and 65 feet high. The nave seats about seven hundred. Designated a Denver landmark in 1968, the cathedral was also placed on the National Registry of Historic Sites in 1975.

Although two transepts from the original design were omitted, the 185-foot long limestone nave amply contains Oberammergau wood carvings from Bavaria and stained glass windows from Boston and London. The more than fifty stained glass windows in the Cathedral represent over one hundred years of stained glass making. In the narthex are four roundels (early nineteenth century) and a small Tiffany window (1889) from the first cathedral. The great window over the portal represents The Last Judgment. This window, designed and executed by the Frampton Studios in London, England, was transported in 1914 under great difficulties due to the First World War.

Here is an image of the Saint Johns Cathedral, courtesy of Doors Open Denver. 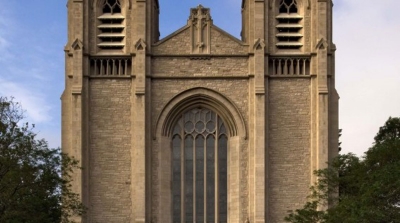 Saint Martin’s Chapel, a part of the Cathedral, was designed and executed by architects and artists working in Denver with the cooperation of the Diocesan Commission on Church Architecture and Allied Arts. This Chapel, with capabilities to seat one hundred, demonstrates the high professional caliber of local artists working together. The Chapel is open daily for meditation and prayer.