At a building cost of $1.5 million and standing 9 stories tall, the Equitable Building was both Denver’s most expensive and tallest building when completed in 1892.This commercial building was the showpiece of Denver’s thriving financial district when it was opened. Designed by Andrews, Jacques, and Rantoul of Boston for the Equitable Life Assurance Company, the 173,000 square foot structure represented Denver’s status as commercial and financial center of the Rocky Mountain region. It was one of several large commercial buildings built in Denver during the economic boom of the 1880s and early 1890s.

The building was owned William Barth, president of the D&RG Railroad, then passed along to his heirs from 1910 through 1956. Tenants of the building included mining and railroad tycoon David Moffatt’s First National Bank, along with the Denver & Rio Grande Railroad headquarters. During 1892, it also served as State executive offices while the state capitol was under construction. Additionally, the Equitable Building housed the legal offices of many of Denver’s leading attorneys, including Mary Lathrop, the first woman admitted to the Bar in the United States. The Silver Panic of 1892 devastated Denver soon after the Equitable opened its doors so that despite its prestigious tenants, lease rates failed to regain their original level until 1902.

Here is an image of the Equitable Building, courtesy of Doors Open Denver. 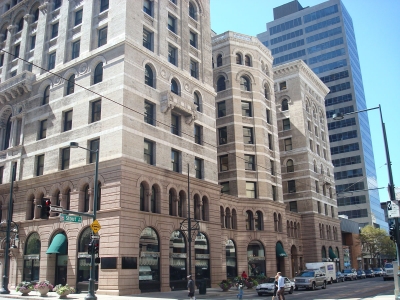 A series of owners and renovations occurred over nearly 90 years until a Canadian firm bought it in 1977 for $1.5 million. Street-level businesses since this time have included various banks and stock brokerage firms and the clothing store Molly’s of Denver. The building as a whole received a $2 million refurbishment in the early 1990s, and in 2000, the Equitable was converted into condominiums, with upkeep of the common areas overseen by the Equitable Building Condominium Association’s Board of Directors. In 2010, major restoration of the stone and brickwork was begun. Early Equitable tenants were leaders in the Denver and Colorado business community.

The building was originally designed in the Italianate or Renaissance Revival style, characterized by symmetry and classical architectural details. The stone and brick construction is accentuated by pale terra cotta string courses. The first two stories are clad in pink granite, with pale pressed brick used for the floors above. A boxed cornice is supported by elaborate modillions. Street level entrances and window openings on the first two levels are round-arched. The 17th Street facade features a large Palladian window at the third-and fourth-story levels. Round-arched windows with elaborate hoodmolds distinguish the fifth and eighth stories.

Intricate details within the building include the Equitable Life Assurance Company’s initial E, which appears throughout the building as a decorative motif. Other decorative features include Tiffany stained glass windows and a lobby rich with marble and mosaic vaulted ceilings. Detailed carvings on the exterior arches show finely carved laurel leaves, acanthus leaves and great wreaths by artist Andrew Garbutt of Boston. They serve to exemplify the Greco-Roman style of the building. The stately stone exterior, with an interior lobby of Byzantine mosaics, Tiffany glass and brass fixtures, grace what is still Denver’s grandest office building.