Built for Denver’s first Democratic National Convention, the Quigg Newton Municipal Auditorium was renovated in 2005. The Auditorium is now home to a state-of-the-art lyric opera house, colloquially referred to as The Ellie, and the sophisticated Chambers Grant Salon. Two incredible original works of art are on display in the Ellie Caulkins Opera House as part of Denver’s 1% For The Arts Program, which dedicates 1% of the cost of all Denver capital improvement projects to funding artwork specifically for the project. The life-like sculpture titled Maria Mosina and Igor Vassine by artist John DeAndrea stands in the lobby on the north side of the building, and a fascinating mural titled Rehearsal by artist Stephen Batura hangs on the south side of the lobby.

Here is an image of the Ellie Caulkins Opera House, courtesy of Doors Open Denver. 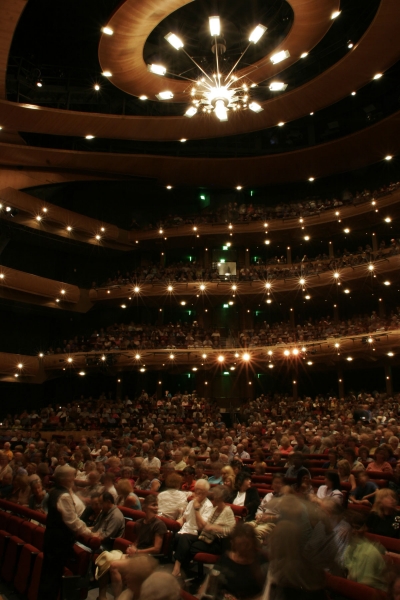 In the Chambers Grant Salon, three of the largest paintings Colorado artist Vance Kirkland ever created grace the walls, side-by-side, as a tribute to the performing arts showcased in the building. The paintings, titled Vibrations of Scarlet on Crimson, Space Mysteries and Explosions in Unknown Space were contributed by the Kirkland Museum. A series of seven fine art tapestries by internationally renowned artist Herbert Bayer (1900 – 1985) are on display in the hallways of the opera house. The tapestries were contributed to the Ellie by long-time Denver art collectors, Jamie White and Andrew Sirotnak.

A dazzling chandelier, created by celebrated artist Dale Chihuly, hangs in the foyer of the Ellie. Overall, the chandelier in the Ellie incorporates 500 separate glass pieces and took about two and a half days to assemble and light correctly. Amazingly, there are no lights attached to the chandelier itself–the way the light reflects off of the glass exudes its own magnificent glow . Chihuly chandeliers are suspended from ceilings of some of the most celebrated spaces in the world.