The building here was designed by the predecessor of the architectural firm that now makes its Denver headquarters within: Fisher & Fisher (creators of South High School and the Voorhees Memorial at Civic Center Park), which later became Fisher & Davis, then Davis & Associates, and finally Davis Partnership. In the early 1980’s the structure was remodeled to be a furniture showroom, and shortly after converted to the Twenty-Three Parish Nightclub. The building sat vacant until the Davis Partnership renovation in 2000.

Here is an image of the Davis Partnership Architects building, courtesy of Doors Open Denver. 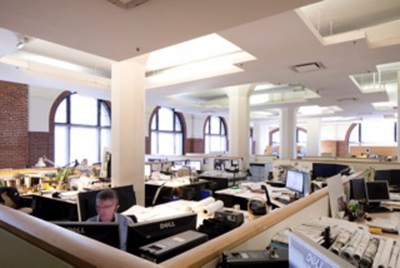