Bikes on the 16th Street Mall?

We’ve all seen the deluge of statistics showing the increases in biking as a mode share in Denver. According to the Downtown Denver Partnership’s 2014 Downtown Denver Commuter Survey, the number of people commuting downtown by bike has increased by 43% in the last year.

Combine that with new bike lanes such as the crowdfunding project on Arapahoe Street and the forthcoming Bike Hub at Union Station, and it’s clear to see that we live in a “bike city.” So why is that on Denver’s most iconic multi-modal street—the 16th Street Mall—bikes are all but completely banned? 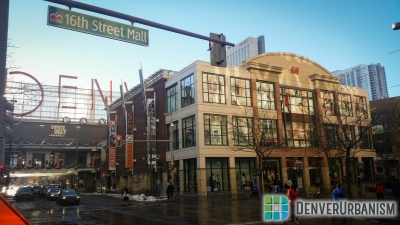 True, bikes are allowed on the mall on Sundays; and the city is considering lifting the ban for Saturdays. But is that enough? As a bike advocate, I’m excited for this progress, but for such a bike-friendly city, even the combination of Saturday- and Sunday-only access seems more like a consolation than a victory. 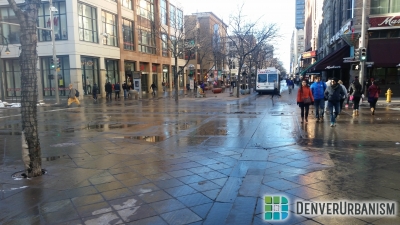 The purpose of the current bike ban is to protect pedestrians and bicyclists—itself a necessary precaution given the handful of bike accidents that have occurred there. However, as bikes continue to make up an increasingly large mode share in the city, perhaps the time has come to rethink how we navigate interactions involving bicycles, as well as, fundamentally, how we categorize them. According to Chapter 54 of the Denver Revised Municipal Code bicycles are categorized as vehicles, “with all the rights and duties that apply to motorized vehicles.”

That’s a problem. Bikes are not cars. With the downtown bike commuting mode share approaching seven percent, bikes have earned the right to a separate designation with its own codified rights and duties in the city. This would also make bicyclist more accountable for obeying laws.

All in all, the ordinance to lift the bike ban on Saturdays is a positive step. But instead of asking whether to allow bikes on the mall, maybe we should ask how to incorporate bikes safely into the mall, in order to make it truly multi-modal.