Adaptive reuse—that’s planner-speak for the repurposing of an old building—is an important part of helping cities revitalize and grow in a sustainable way. Some adaptive reuse projects are no-brainers, where the historic and architectural quality of the existing building is so great that to demolish the building instead of reusing it doesn’t make any sense. Good examples would include the Colorado National Bank (now the Renaissance Denver Downtown City Center Hotel) and The Source.

Then there’s the adaptive reuse project called Avanti Food and Beverage at 32nd and Pecos in Lower Highland. The existing building looks like this today: 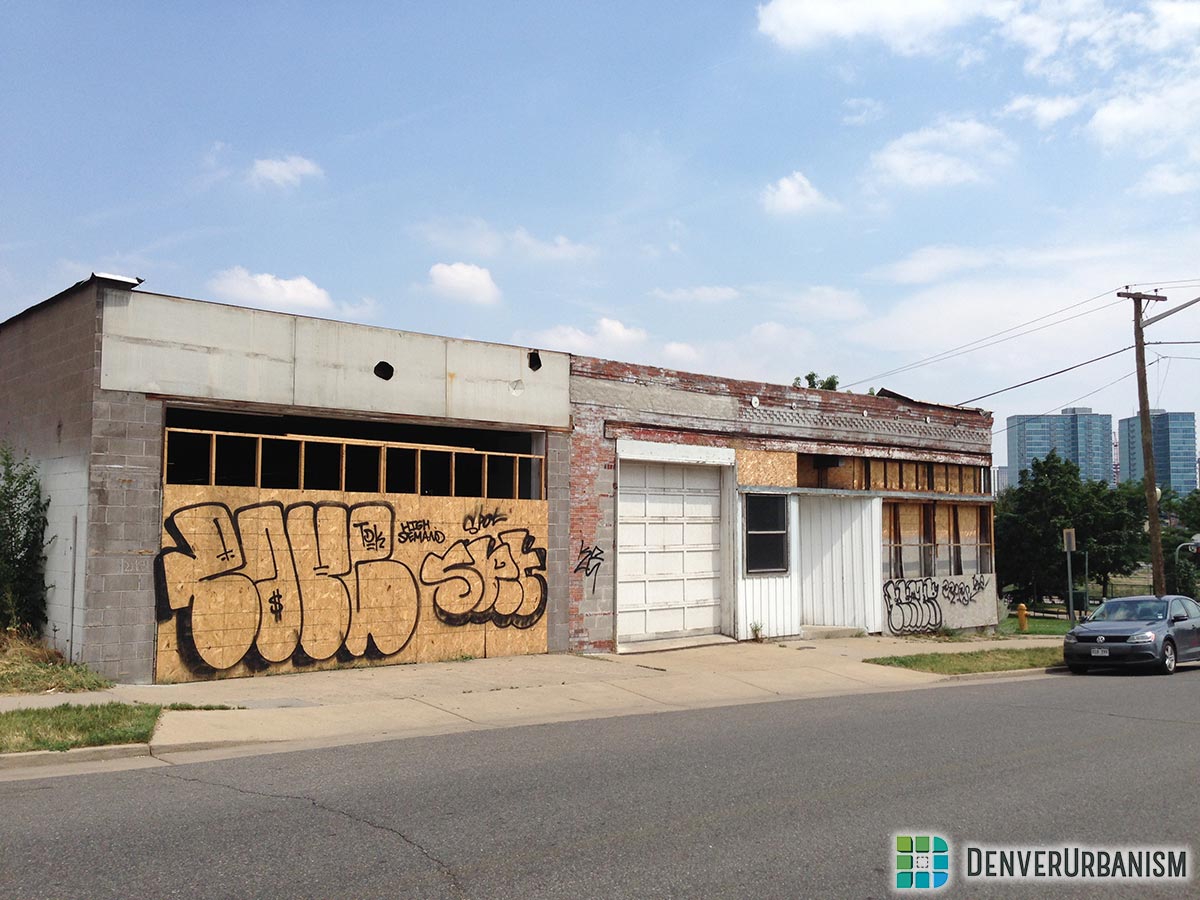 Okay, maybe not an architectural masterpiece, but that’s alright! Even if the structure itself isn’t all that glamorous, the reuse of an old building—in addition to being an environmentally friendly option—helps preserve some of the neighborhood’s physical scale and offers a reminder of fast-changing Lower Highland’s economic roots. This structure, built in 1935, was occupied by Avanti Printing and Graphics for many years. Here’s a view of the inside: 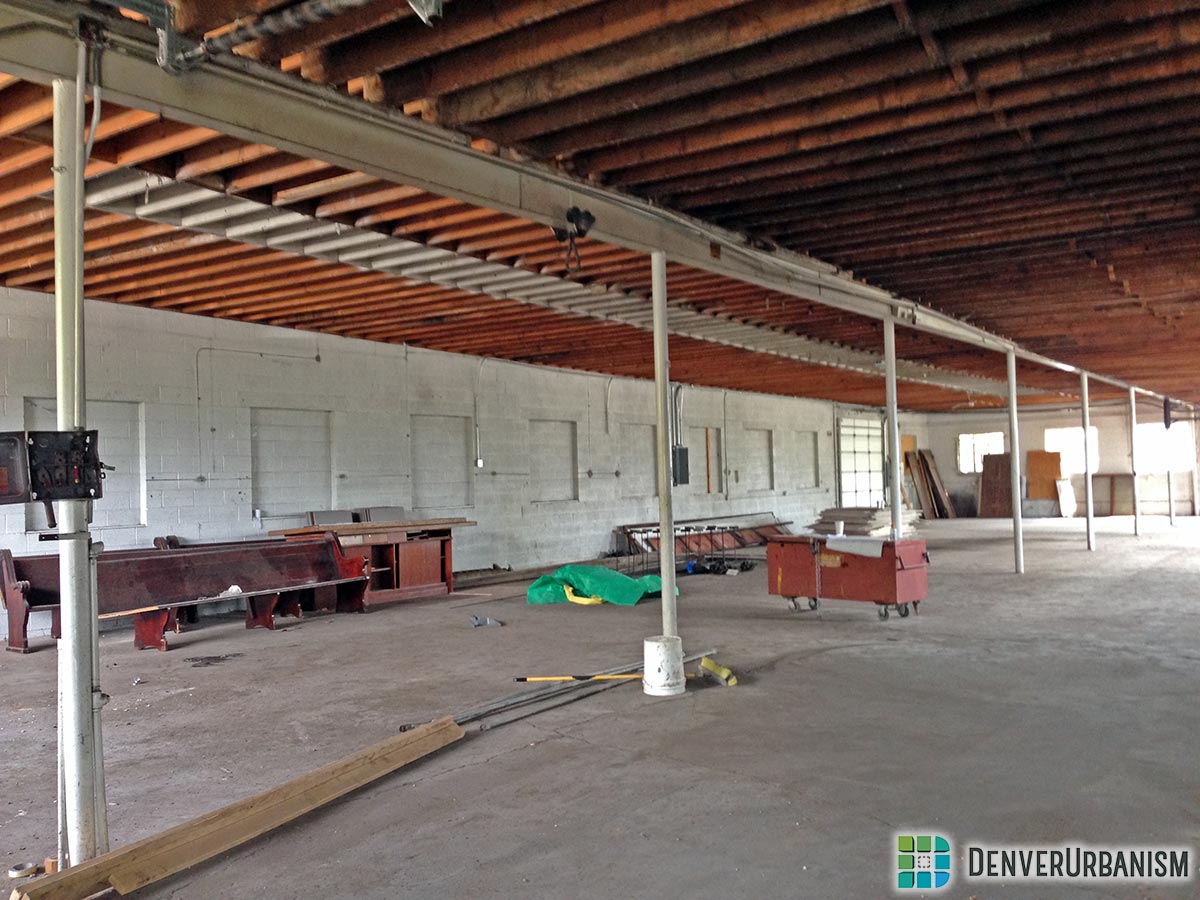 After its physical transformation is complete, this will be the home of Avanti Food and Beverage, a “collective eatery.” The concept behind this project is really cool. Most people are now familiar with coworking spaces, where small start-up companies share office space and resources and collaborate with each other. Avanti Food and Beverage will be very similar, except it’s for restaurants instead.

The building will house eight different restaurants, each operating out of a modified 8′ x 20′ shipping container. This allows restaurant entrepreneurs, particularly up-and-coming chefs, the opportunity to launch a new restaurant or test a new food concept for a fraction of the cost of building out a traditional restaurant space, all while fostering creativity in a cooperative “restaurant incubator” environment. Customers will have a great selection of affordably priced and innovative food, plenty of indoor and outdoor seating areas to share, and two bars offering adult beverages.

Here are a couple of images, courtesy of the Avanti development team. Here’s an example of the shipping container-turned-kitchen: 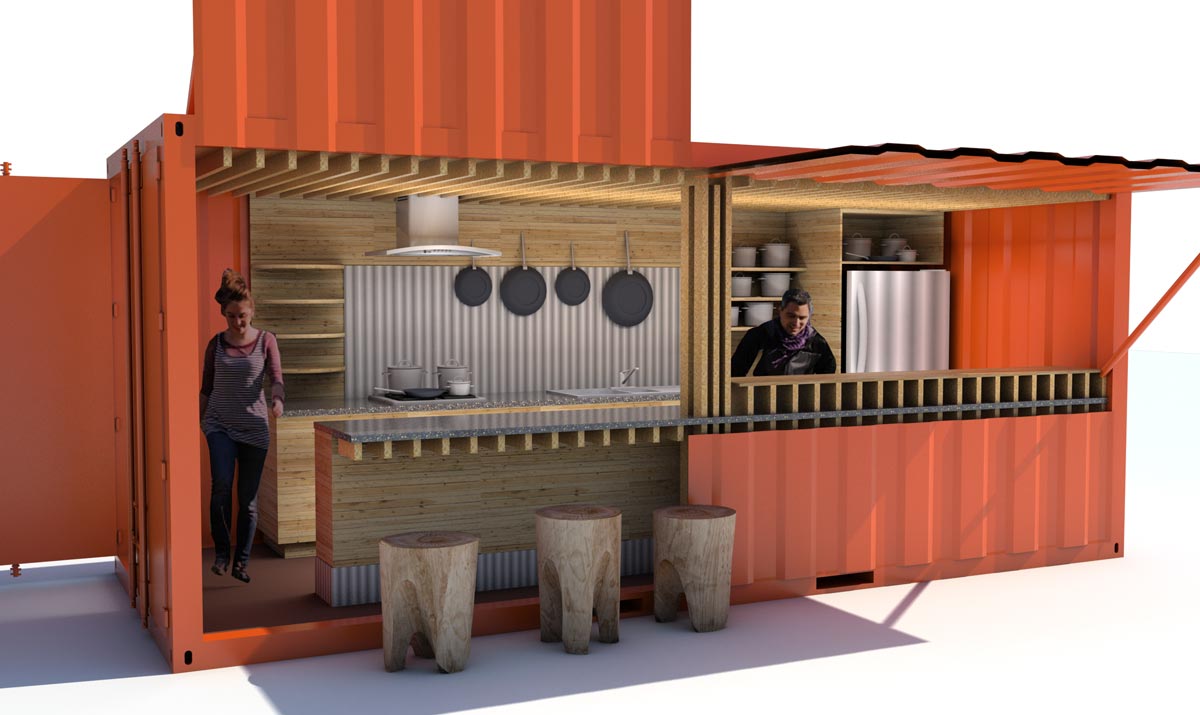 and here is the ground-level interior floor plan showing five of the eight shipping container/restaurants, shared seating areas, and one of the bar areas: 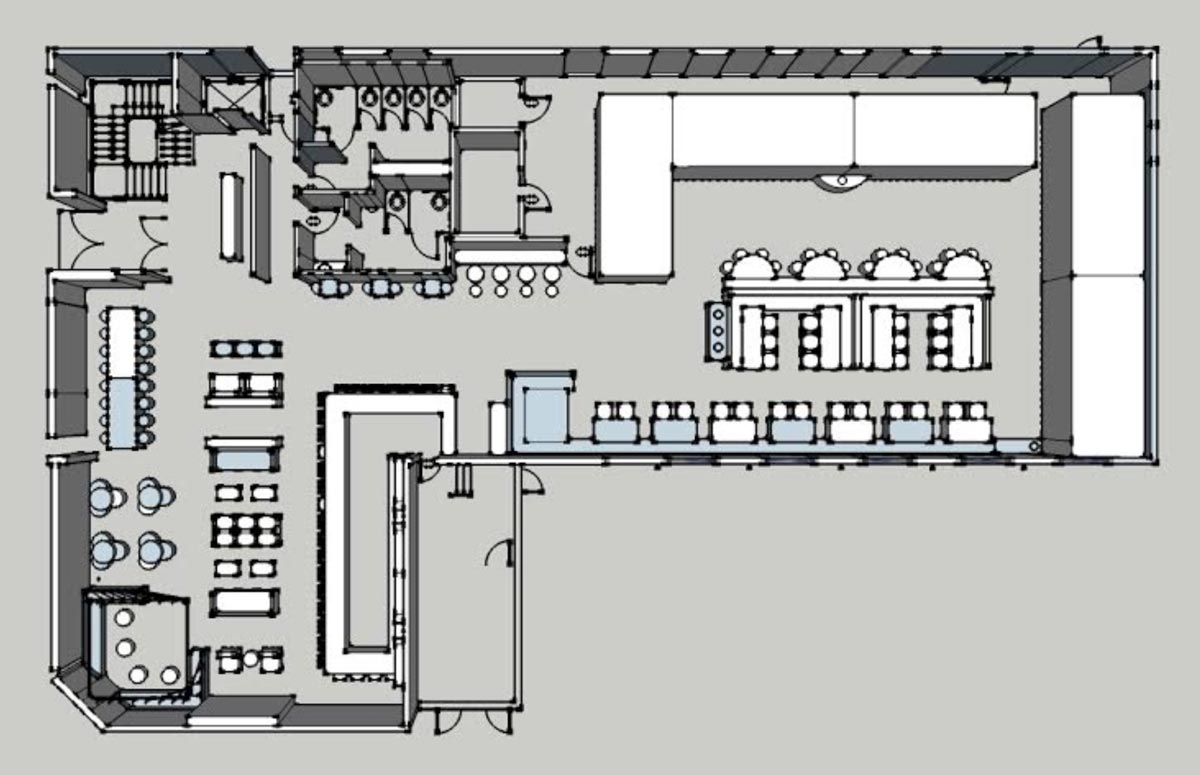 Three more restaurant spaces, the other bar, and additional seating will be built out on the roof, providing awesome views of the Downtown Denver skyline. Here’s a rendering of the rooftop deck, followed by a photo I took from the roof (the power lines will be buried): 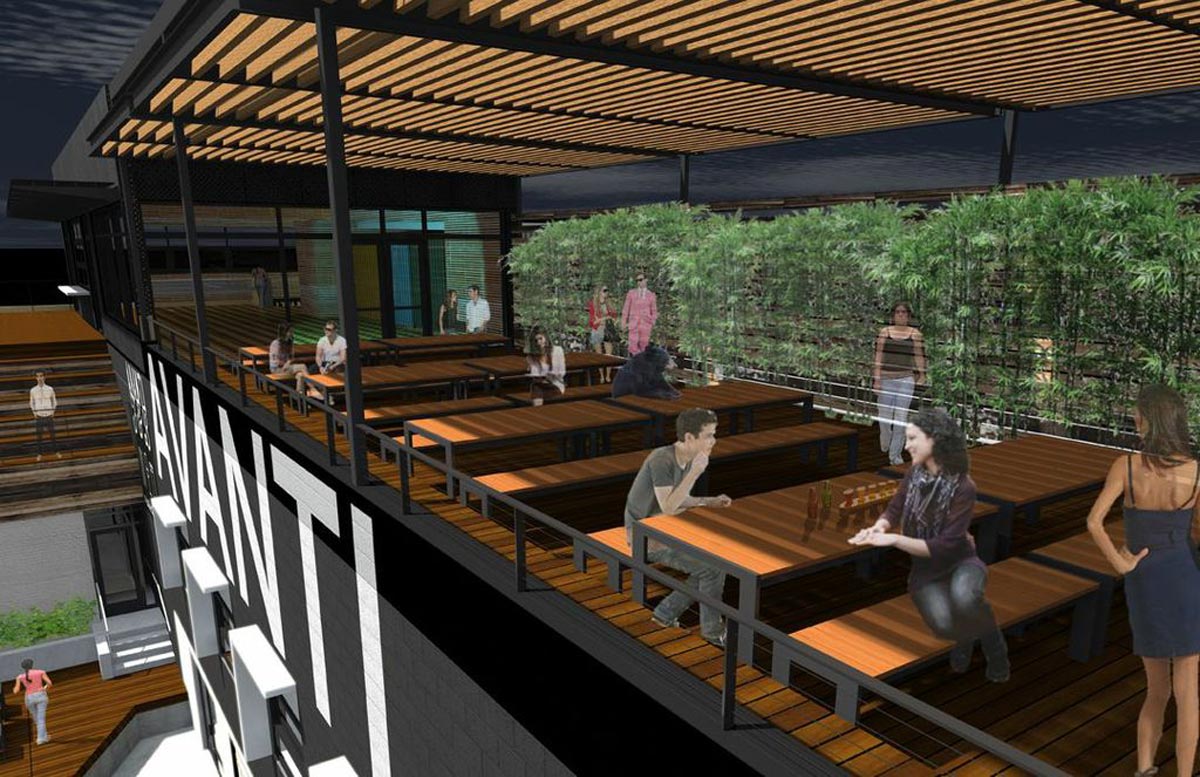 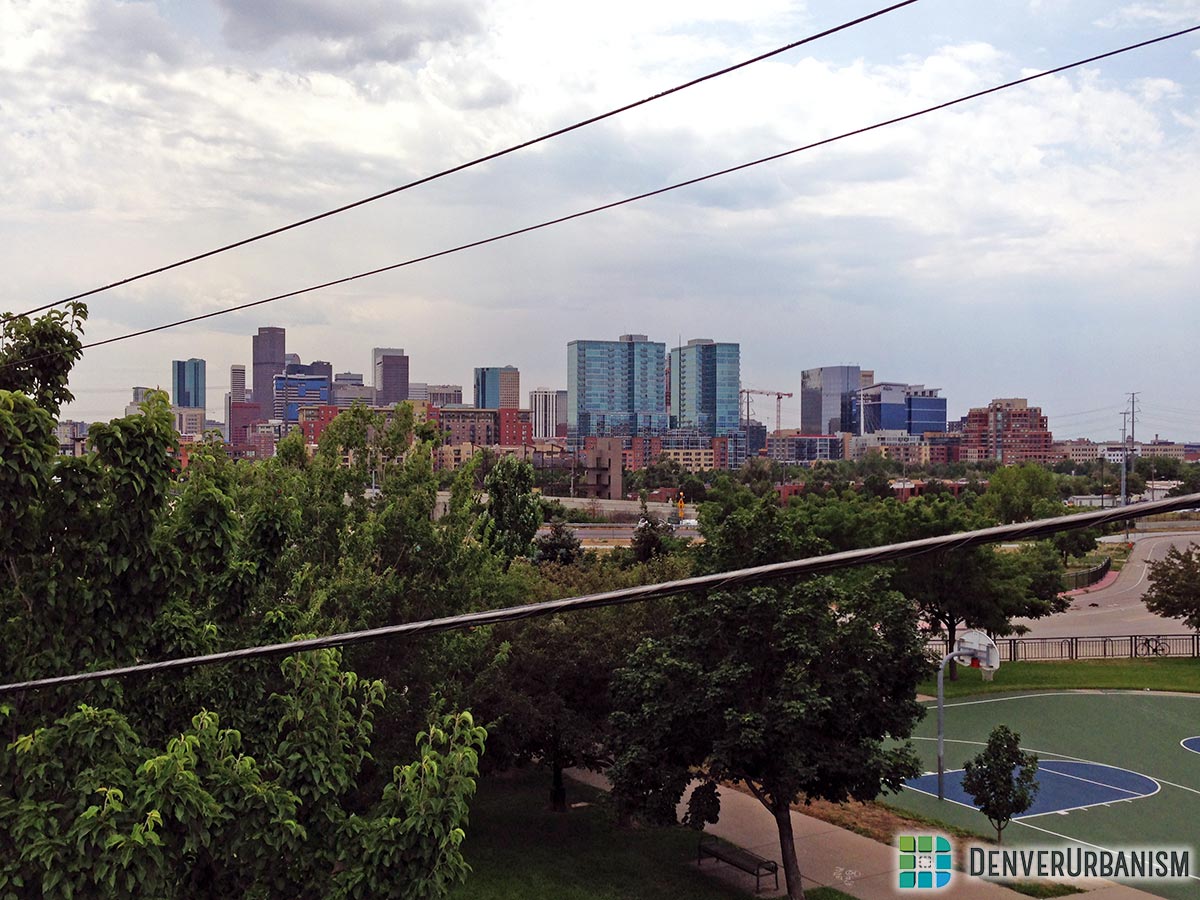 The building will be given a thorough makeover and new windows will bring a lot of natural light to the interior. The grounds will be landscaped along with additional patio seating overlooking Highland Gateway Park: 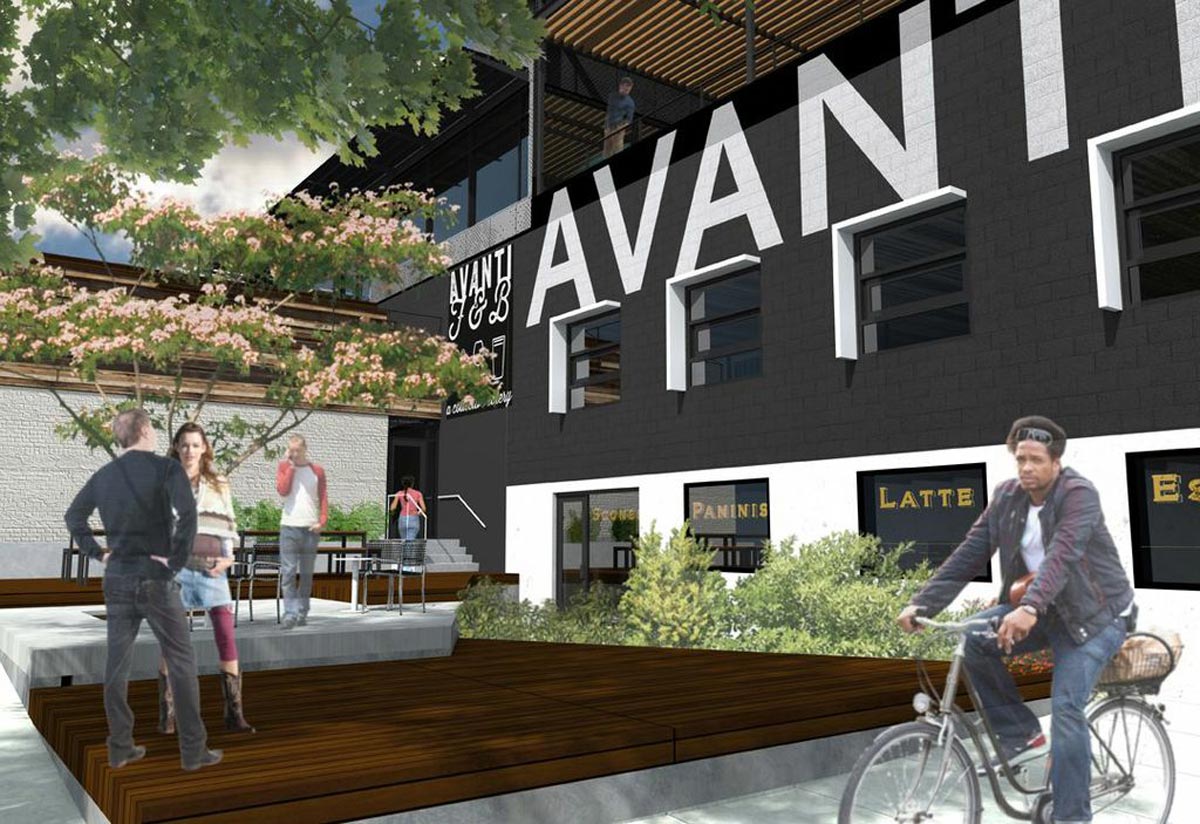 Renovation work will be getting underway soon and the project is planned to open Spring 2015.

The Avanti Food and Beverage project is fantastic in so many ways. It renovates an old building in disrepair; it infuses energy and activity next to a small public park; it adds an innovative concept to Denver’s booming culinary scene; and it brings another great dining option to Denver’s hottest restaurant neighborhood.