After much public debate, an energetic group of local citizens recently came together to put the kibosh on a proposed park redevelopment in City Park called “City Loop.” For those of you who are unfamiliar with the project, it was (in the words of Denver Park’s and Recreation staff) “intended to be a new, multi-generational activity and play area that would replace the existing Dustin Redd playground, which is in need of significant repair or replacement after nearly 20 years of use. The goal behind the current City Loop concept is to create a new area that gives everyone using the park—from small children to older adults—an opportunity to remain active and enjoy a healthy lifestyle.” For more info on the project, you can follow this link to the city’s web page on City Loop.

For the purposes of this blog post, I don’t want to get into the controversy behind the City Loop proposal at City Park but, rather, to urge the city to give this concept another try in an area of the city where it’s wanted and desperately needed. In the wake of the demise of the initial proposal, Councilwoman Susan Shepherd and Councilman Paul Lopez have been working with local neighborhood groups to ask the Parks department to reinvent the concept in Paco Sanchez Park. Never heard of Paco Sanchez Park? That’s precisely one of the reasons for this proposal. Unlike City Park, this park is relatively unknown and underutilized. It is also situated in a neighborhood where there are a great deal of low-income families with children who could easily access the park by foot, by bike and by rail. The following is a Google Earth aerial photo of Paco Sanchez Park.

Paco Sanchez Park, named for a local Hispanic activist and radio broadcaster, is located in Lakewood Gulch between Federal Boulevard and Knox Court on Denver’s west side. The brand new West Line cuts right through the middle of the park; in fact, it would completely sever the park in two if not for a new pedestrian bridge that was built as part of the light rail construction. The park is part of an extensive bicycle corridor that connects west-side residents to the Platte River and is book-ended by two light rail stations. Bus lines run down Federal and Knox Court making this park accessible to virtually every mode of transportation this city has to offer (except B-Cycle, but that could come later).

With the exception of the light rail bridge, some bike path and storm drainage upgrades needed for the light rail project, and a highly successful Frisbee golf course, the park has not seen substantial investment in decades and could seriously use an update. The park is utilized, but not to the extent that it could be, because there is not much in the way of programming and because some of the facilities that do exist are deteriorating. While there hasn’t been much investment in the park in recent history, there is beginning to be a great deal of reinvestment in the neighborhoods surrounding the park; plans are in the works to revitalize the Sun Valley neighborhood and its DHA housing project to the east, and a new mixed-use development with a new public library is being built a block to the north (link). While City Park could certainly use additional maintenance and investment, I personally think bringing the City Loop concept to a less beloved park, which is in greater need of investment and activation and is in a neighborhood that is transitioning into a denser transit-oriented neighborhood, makes a great deal of sense. Let’s see what this might look like. 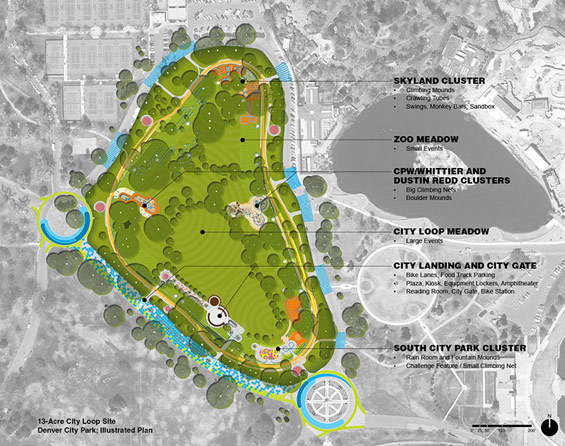 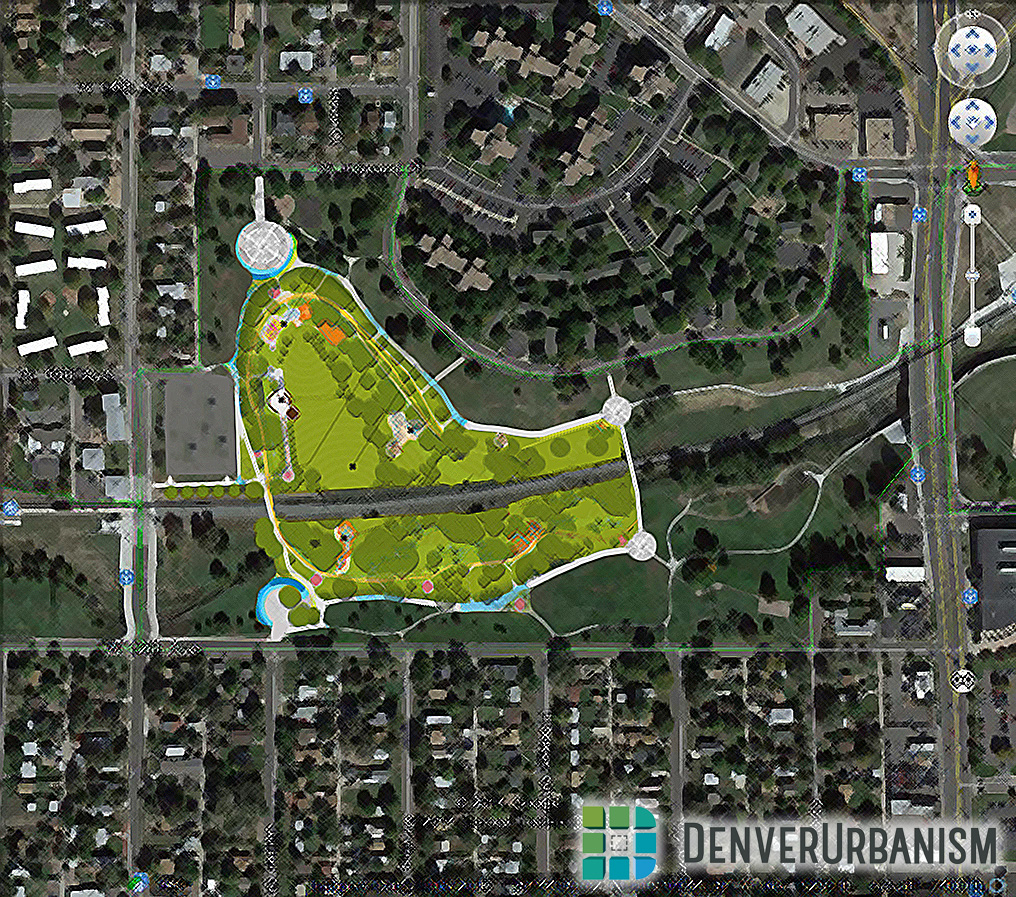 The photo on the left is the proposed City Loop concept for City Park taken from the city’s website. In the image on the right, I’ve taken this concept, overlaid it (relatively to scale) on top of Paco Sanchez Park and made some slight modifications to make it work in this park (I’ve also taken the liberty of giving it a bit of a filter, so it looks more conceptual). While there would need to be significant modification to the plans due to topography (it is in a gulch after all), the concept of a looping trail with multiple interactive playground nodes could work very well here. The concept would greatly help to tie the two halves of the park together allowing for more interaction from one side of the gulch to the other, and since the “loop” is centered on the light-rail line (crossing over it twice), the park could really celebrate transit as part of the experience.

There are a few other reasons I think this is a great idea and should be implemented (and I do hope Lauri Dannemiller of Denver Parks and Recreation is reading this). First, there are a very large number of ethnically and racially diverse, low-income families with children in the Sun Valley, West Colfax, Villa Park and Barnum neighborhoods who would have direct access to this park via, foot, bike, bus and train. These kids can’t necessarily afford to go to Elitch’s and don’t have the luxury of being driven to nicer suburban parks with new modern playgrounds, spray pads and the like. This could be a great place for them to be kids, to explore and be active. It could be their amusement park. What’s more, many of these kids are at risk for obesity, and the health risks associated with it. This new concept with a walking loop and multiple play areas would help keep these kids more active and healthy (and it could help their parents too).

Second, I think the park could become a real jewel in what is already a nice green necklace of parks that cuts through the west side of Denver. Finally, there has been much concern among long-time locals about the strain that new development around Sloans Lake Park may put on that park. I firmly believe that creating another destination park within the general vicinity would ease some of the pressure off that already well-used and beloved park. I do hope that the city parks department shares the opinions of Councilwoman Shepherd and Councilman Lopez and seriously considers this proposal. I think it could really be a win-win for the neighborhoods surrounding Paco Sanchez Park and for the City of Denver as a whole.