Let’s Plan Around the Pepsi Center 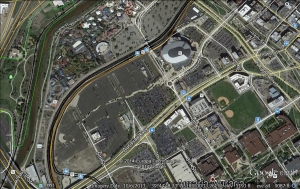 Recently the city undertook planning efforts in the Sun Valley Neighborhood south of Mile-High Stadium and suggested conversion of some of the parking lots (especially those south of Colfax closest to the light rail station) to residential and commercial uses. Doing so would activate a highly blighted and underutilized area with good public transit access and proximity to the South Platte River Greenway and help create a more viable and sustainable community in the area. Unfortunately, given the large amount of undesirable infrastructure in the area (e.g. a power plant, electrical substation and massive fuel tanks) and the fact that it is extremely difficult to create economic development around a football stadium with less than 20 large events per year, the goal of redevelopment in the area seems extremely lofty.

Now if the City can plan for such a lofty and questionably obtainable goal, then I have to ask why we aren’t planning for what I consider to be a much lower hanging fruit: the lots around the Pepsi Center. With over 40 Nuggets games, 40 Avalanche games, and numerous other concert and sporting events each year, the Pepsi Center brings a huge number of people into the area on a regular basis. Add to this existing activity the site’s extreme proximity to Downtown and the Auraria Campus and there’s a lot of potential for residential and commercial development on this site. When you consider that the site is flat, has excellent vehicular infrastructure around it and has access to two (very underutilized) light-rail stations, redevelopment here seems very feasible with little added investment. We just need to plan for it.

By my rough calculations there are nearly 50 acres of parking lots immediately surrounding the Pepsi Center (between the railroad, Speer Boulevard and the Auraria Parkway). There is an additional 15 acres of parking shared with Elitch Gardens just north and west of the arena. This represents an area that is equal to or possibly greater than all the infill development between Union Station and the South Platte River and could be a huge economic boon for the city if developed right. What might this redevelopment look like? The following are my thoughts on a plan for the area. 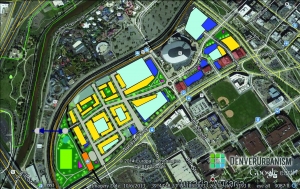 First I would consolidate a large amount of the surface parking into a few large parking structures (cyan) that are wrapped with residential (yellow) and commercial (blue) structures that form walkable city blocks. Preserving the few existing mixed-use buildings (red) and providing some additional commercial office space in the district would help increase use the parking structures by day while the arena utilizes them at night and on weekends. Second, I would intersperse some green promenades that could be designed to handle and clean storm water runoff before running into the South Platte. These green spaces might be designed so as to provide view corridors to the arena from the major arterial streets for visual wayfinding. The promenades would also provide pedestrian access to and from the Arena, Downtown, the Auraria Campus and the light rail stations on the edges of the site.

As long as were making big plans, let’s also talk about combining the “Sports Authority Field at Mile High” and the “Auraria West” light rail stations into one station along Fifth Street under the Auraria Parkway viaduct (orange above). The two stations are way too close together and extremely redundant; eliminating one station and straightening out the track would speed up the trip into Union Station from points south and west. The city could then use the rest of the property between the tracks for a small park with recreational amenities for the new residents. Finally, I propose that we connect the new development to the South Platte River trail via a bike/pedestrian bridge across the railroad tracks, and thus provide even more recreational access to and from the new neighborhood.

As Denver continues to grow and expand and urban living becomes increasingly more popular, we need to take a serious look at the opportunity for creating a new downtown adjacent neighborhood around the Pepsi Center rather than leave it an asphalt wasteland. If designed and developed right, this corner of the Auraria Neighborhood could become the hottest new address in town.