Status of US Bikesharing Systems As of 2013

American bikesharing boomed in 2013 like never before. Led by huge new systems in New York and Chicago, the total number of bikesharing stations in the US more than doubled, from 835 at the end of 2012 to 1,925 in 2013. 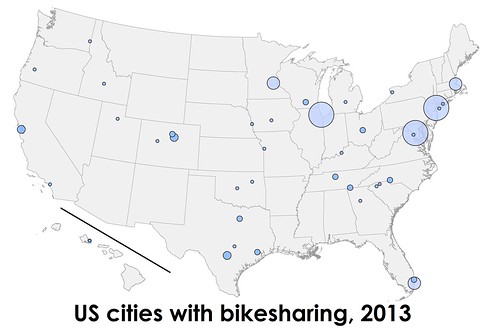 After three straight years at the top of the chart, Washington’s Capital Bikeshare slipped behind New York’s newly-launched Citibike. Chicago also launched its system, Divvy, and ranks a close third. Those three cities each have at least 300 stations and make up a clear first tier nationwide. After them, no other systems crack 200 stations.

Denver’s B-Cycle grew from 53 to 81 stations, but still dropped from 5th largest in 2012 to 7th largest in 2013, because of New York and Chicago’s launches. But Denver’s growth was enough to remain ahead of San Francisco, the next largest new system in 2013, with 67 stations.

Overall, 13 new bikesharing systems opened in the US in 2013, bringing the total to 40. In addition to New York, Chicago, and San Francisco, other noteworthy additions this year included Fort Worth, Columbus, and Aspen.

At this point, it’s fair to say we’re no longer in the pioneering period. Any city that still doesn’t have bikesharing is beginning to fall behind.

It’s not just the big coastal cities where bikesharing is becoming popular. There are some unexpected hotspots, where groups of nearby cities have independently launched small systems. Colorado’s three cities is a growing cluster. Meanwhile, four Texas cities have bikesharing, plus two more in Oklahoma. Small systems are also popular in the southeast, with 6 systems in close proximity in the Carolinas, Georgia, and Tennessee.

Oddly, the only area of the country that seems particularly underrepresented is the west coast. San Francisco’s Bay Area Bikeshare finally became the first large west coast system this year, but it’s still the only one. Portland, Seattle, and Los Angeles continue to lag.

Here’s the complete list. New systems in 2013 are in bold. Previous years are available for comparison.

Notes: Systems covering multiple jurisdictions are counted either together or separately depending on how they choose to represent themselves. Thus Bay Area Bikeshare is counted as a single system, while Denver B-Cycle and Boulder B-Cycle are counted separately.