Very, very exciting news from RTD! Last night, the RTD Board of Directors heard from a recommendation from RTD staff to approve a proposal from a partnership between Graham, Balfour Beatty, and Hamon Constructors (known as GBBH) to design and build the North Metro Rail Line all the way to 124th Avenue by January 2018! 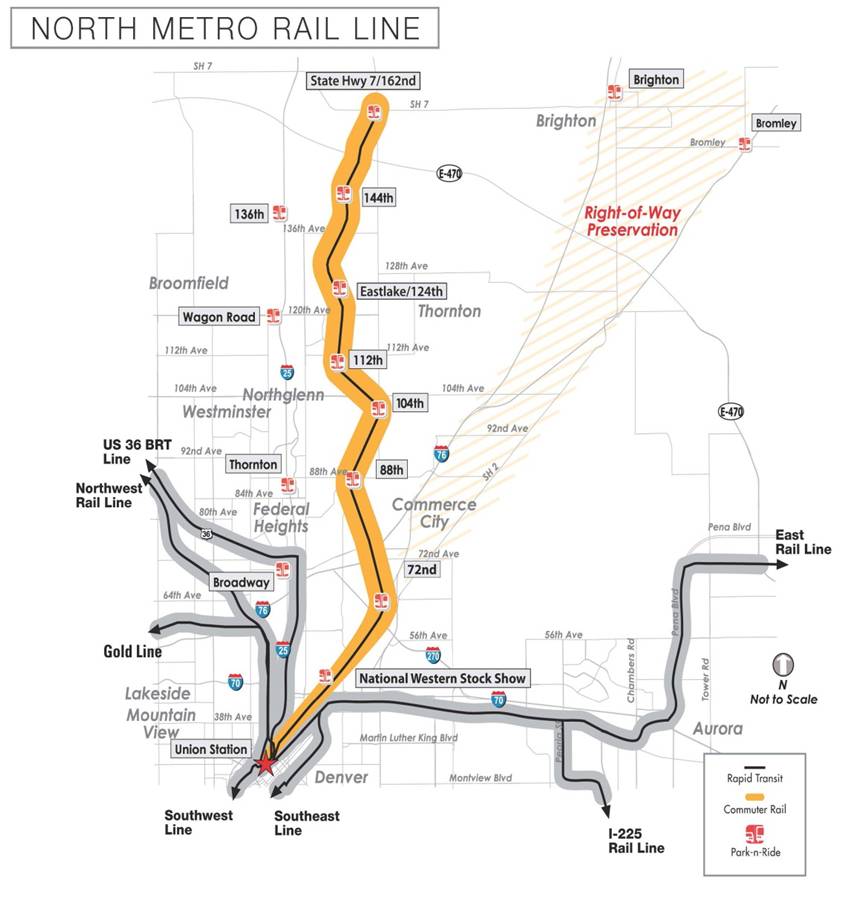 RTD received an unsolicited proposal from GBBH this past February and determined that it was worthy of moving forward to a competitive procurement process (as is required). After issuing a Request for Proposals (RFP) this summer, RTD received four competitive proposals – one from GBBH, one from a Bechtel/Herzog joint venture, one from a Kiewit/Stacy and Witbeck joint venture, and one from URS Energy and Construction.

The GBBH proposal included the full build-out of the North Metro Line to 162nd Avenue, but RTD staff recommended that the first phase of the project be built to 124th Avenue. This recommendation was made for two reasons. The first is a realization of cost – Phase 1 will cost $343 million, which RTD will finance by issuing Certificates of Participation (COPs). This ensures that the first phase is affordable for RTD, given it’s current borrowing capabilities and other obligations. Secondly, building to 124th Avenue serves a majority of the projected riders on the corridor. RTD can exercise an option with GBBH to complete the line to 162nd Avenue if/when money becomes available.

Additionally, GBBH has proposed options to complete the three extension projects – the Central Rail Line , Southwest Rail Line , and Southeast Rail Line Extensions – in addition to build an extension from 162nd Avenue north to Longmont, as well as extend the Northwest Rail Line from 71st & Lowell north to 88th & Harlan. RTD will need to identify and secure additional funding before exercising any of these options proposed by GBBH. However, it is exciting that these options are at least possibilities.

Obviously, all of this is contingent on the RTD Board of Directors agreeing with RTD staff and moving forward with this proposal by GBBH. The public will have the chance to issue comments to the Board at a FasTracks Monitoring Committee meeting on November 14 (next Thursday) and at the November 26 RTD Board Meeting. The Board is expected to take formal action on a potential contract award at that meeting later this month.

RTD has asked the private sector for solutions to help push for completion of unfunded FasTracks projects, which started in 2011 with the Transformation through Transportation industry forum. This unsolicited proposal was a direct result of that process.