Time to take a sneak peek at all of the improvements going on down at Union Station. Thanks to our friends at RTD, I was lucky enough to get a hard hat tour of the progress being made on our soon-to-be-completed $500 million transit hub.

As you can see below, crews are nearing completion on the train canopy and commuter rail platforms. It was a bit of an odd feeling being able to walk on the western face of Union Station, as we never really were able to before due to the HOV ramp and Amtrak station. 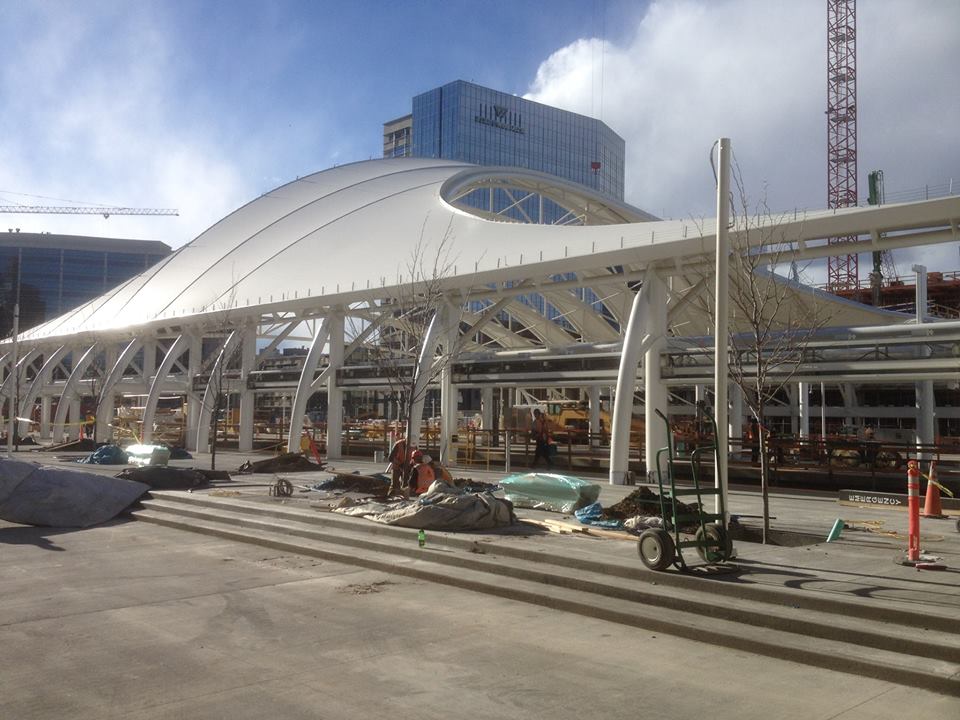 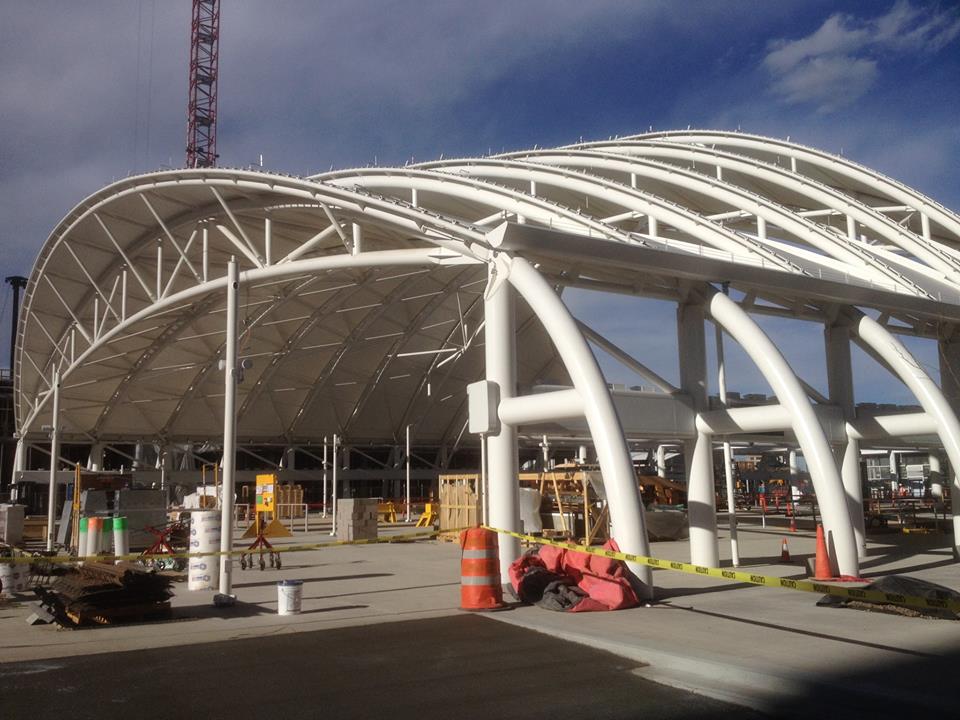 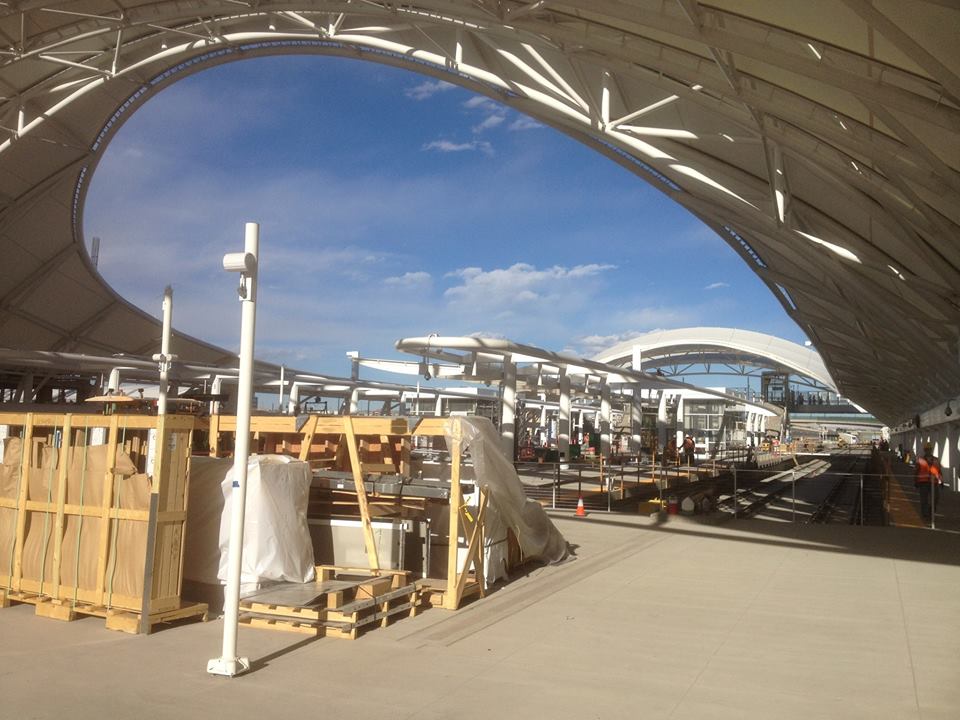 It’ll be awesome the first time we can walk out the western doors of the main hall onto the platform. The canopy is even more impressive up close. It seemed a lot larger to me standing inside the canopy than it ever did watching it be built. 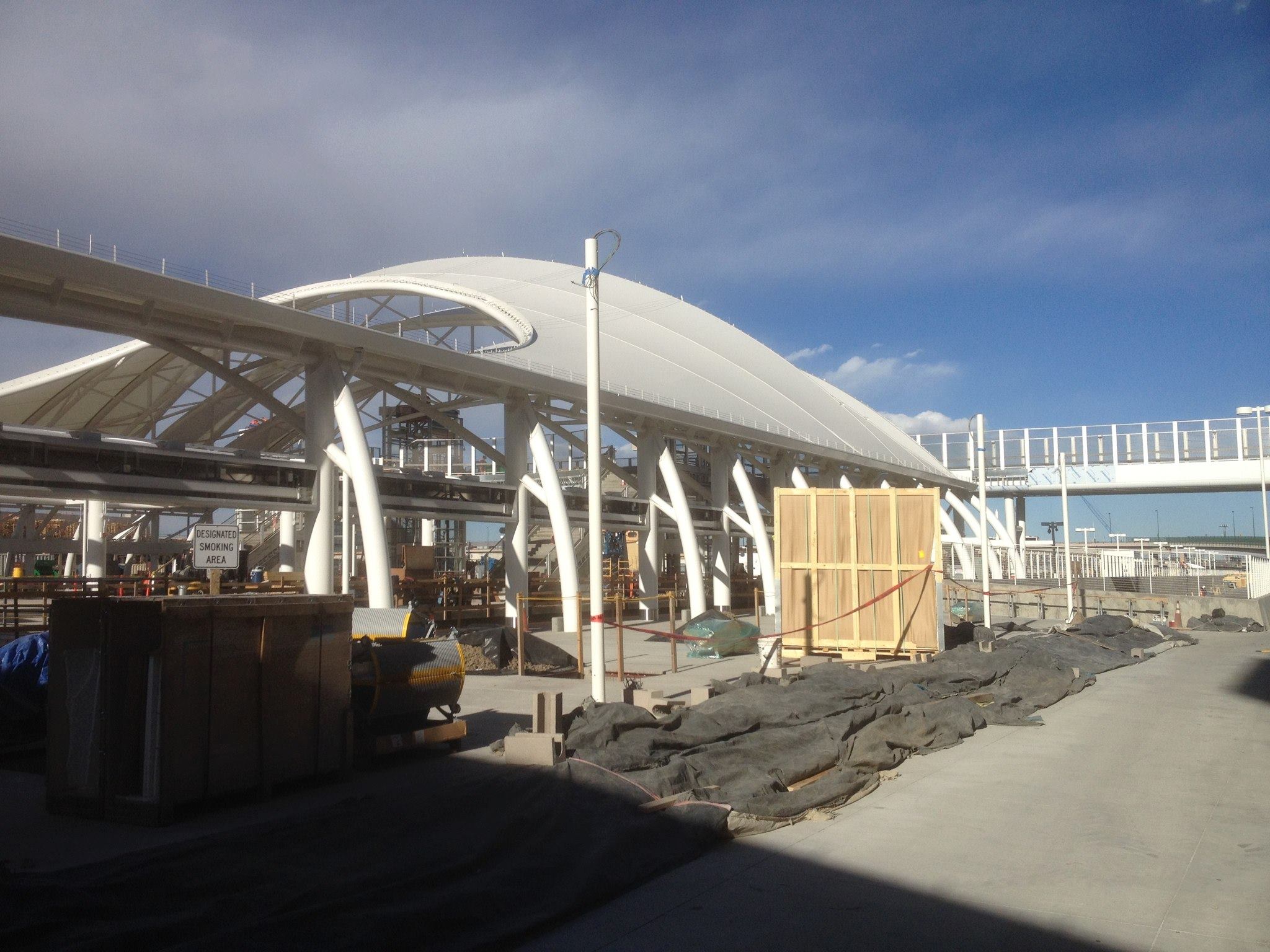 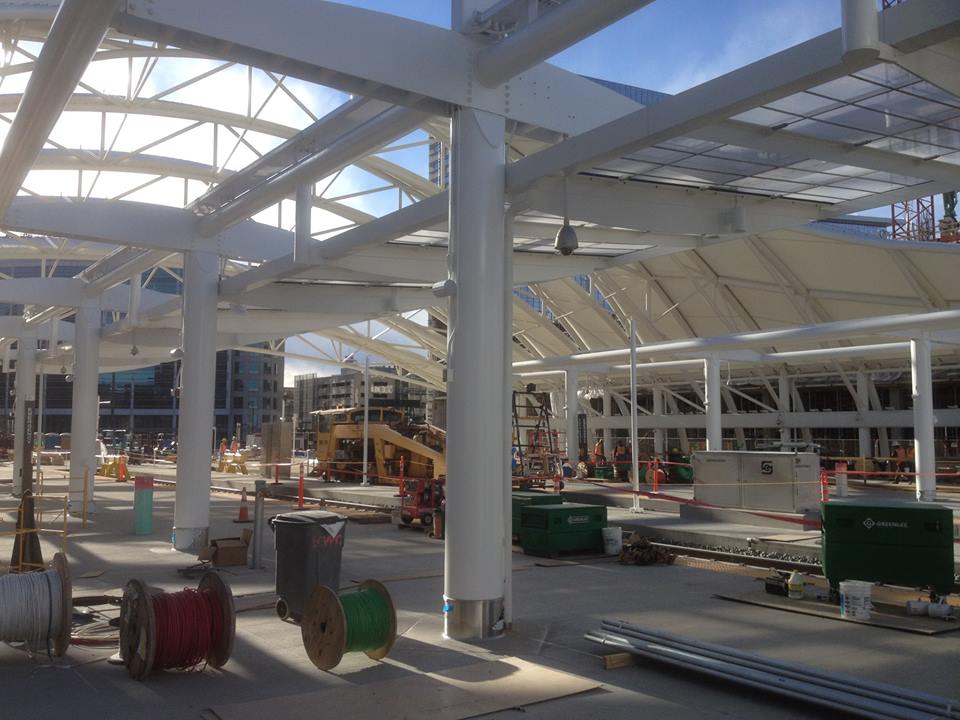 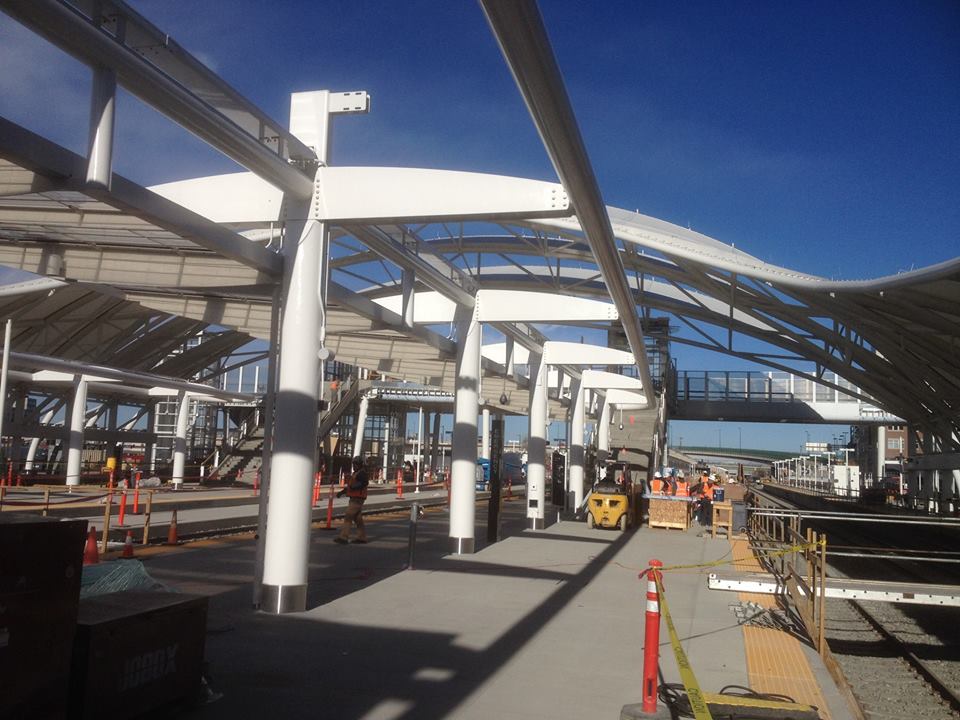 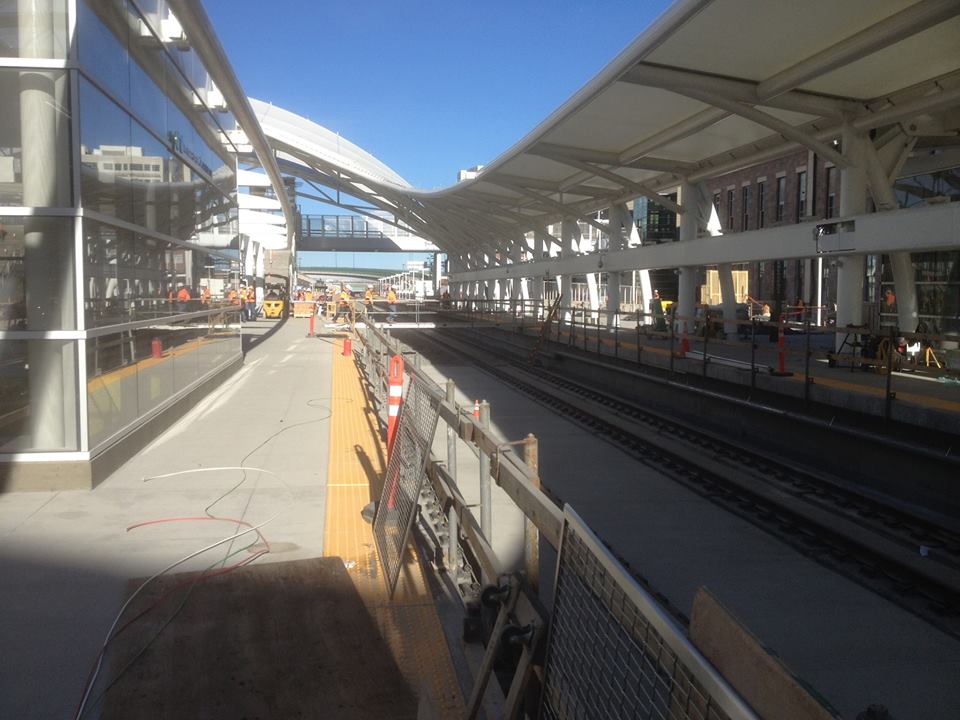 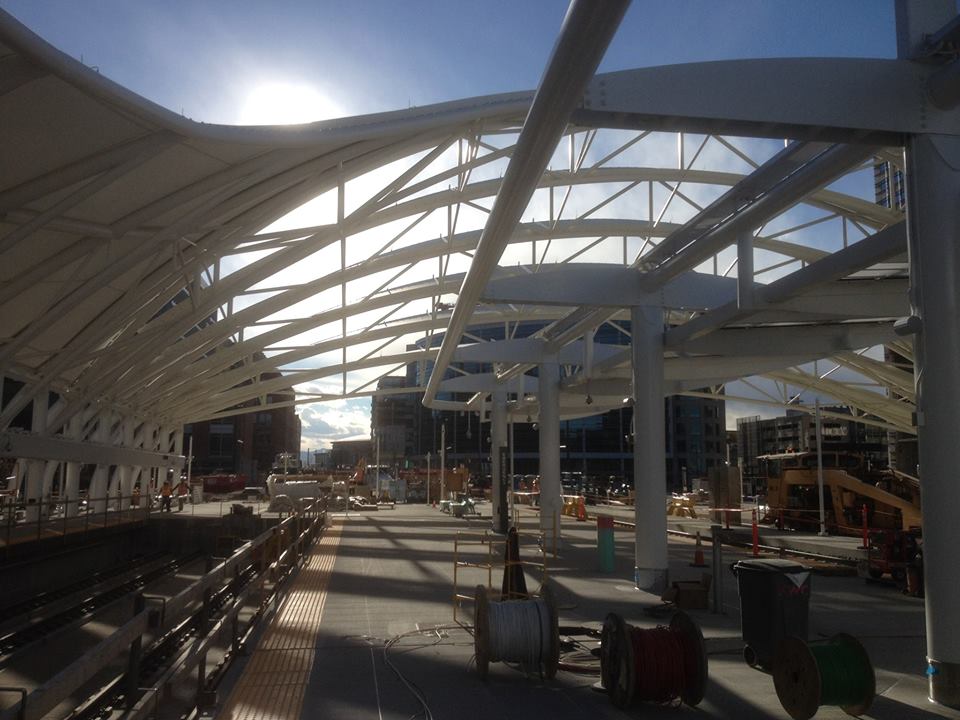 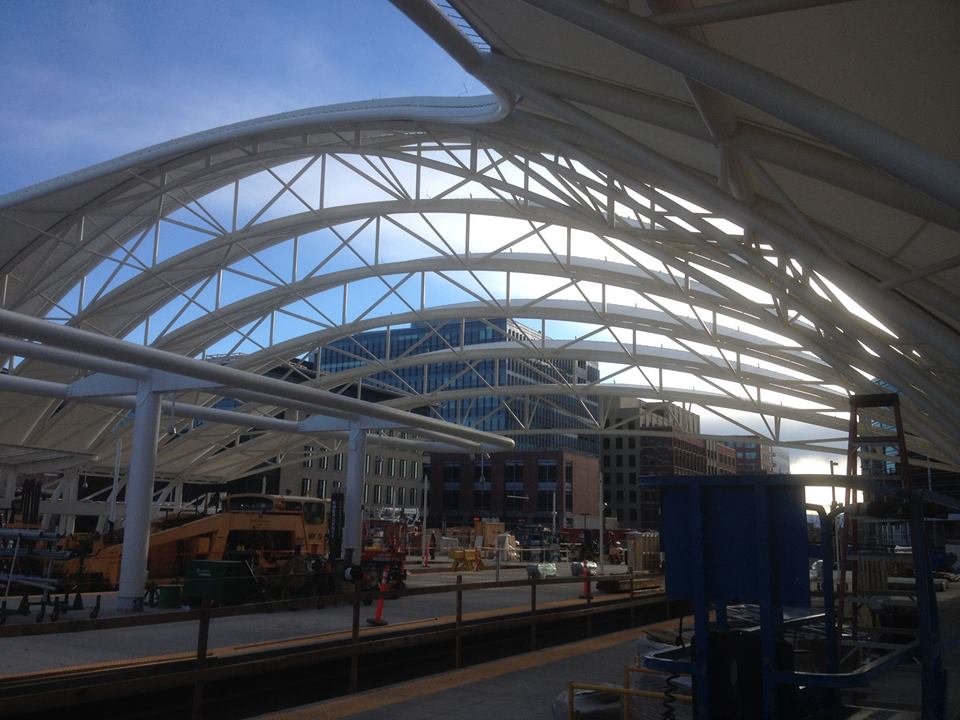 For those that don’t know, the white canopy is the same material used at DIA (Polytetrafluoroethylene, or PTFE for sh0rt). The material is great for uses such as canopies, but the stuff is pricey – upwards of $60 per square foot! The canopy offers some slick views of the iconic Union Station sign, as well. 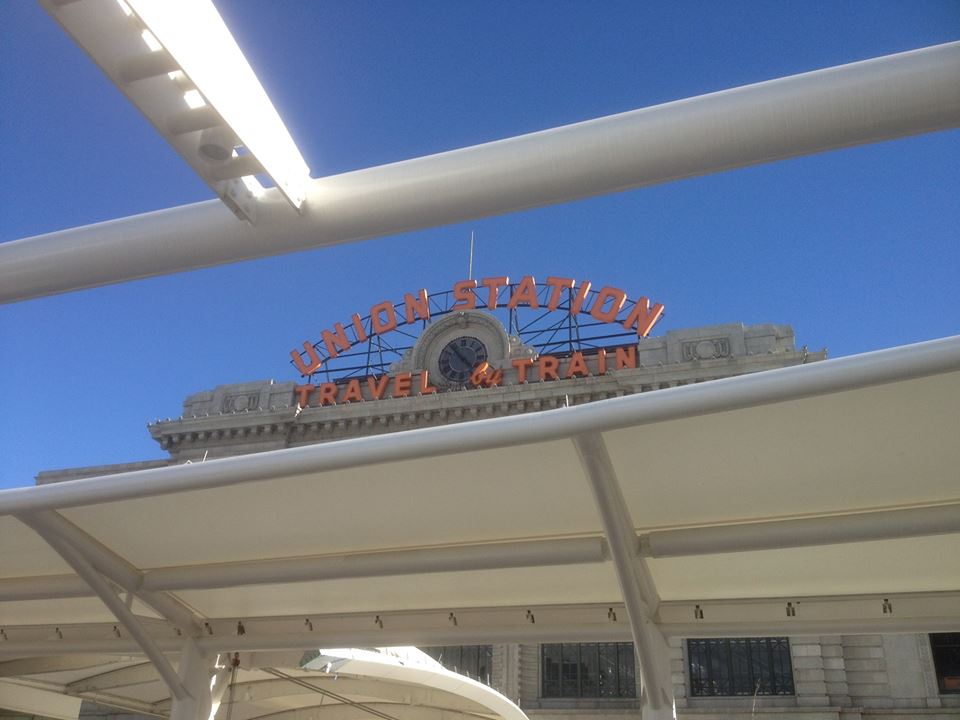 There has been a lot of discussion over the smaller canopies along the track platforms and whether or not they will have covers. The answer is…kind of. As you can see below, there is a cover that runs along Platform 4 (the Amtrak platform) – this is a clear PTFE fabric. This is only on the Amtrak platform. The rounded object, has no cover. Hence, I hesitate calling it a canopy. The structure holds fiber optics and other wiring which enables the lights and security mechanisms present in the station. I don’t really see a need for a covered canopy – we have plenty of sunshine, and if its raining or snowing, you can walk to either end of the large canopy which provides plenty of cover. 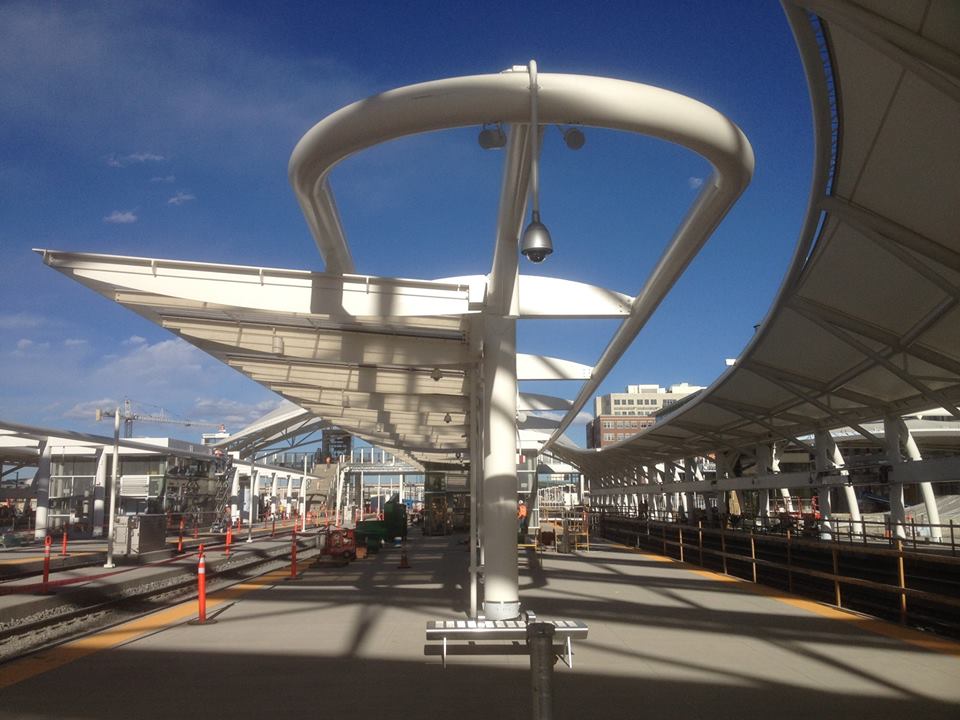 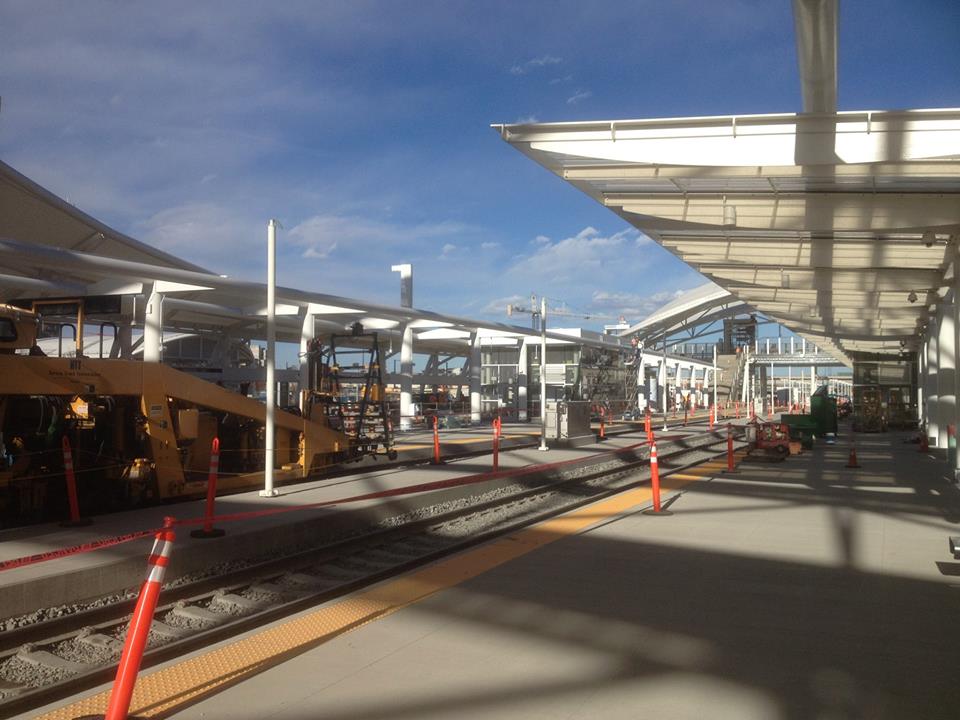 Access to the Central Platte Valley from Lower Downtown is become much, much easier once Union Station is complete thanks to a new pedestrian bridge being built over the tracks which will connect Wynkoop and Wewatta Streets. The bridge also provides direct access to the rail platforms and 22-bay bus complex at the Union Station Transit Center. 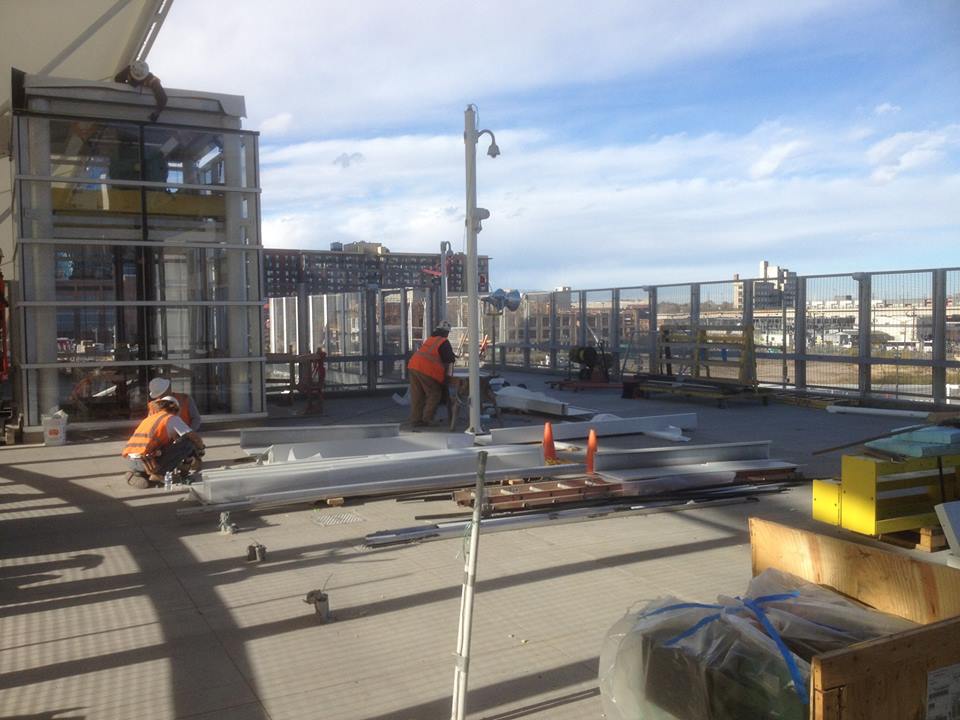 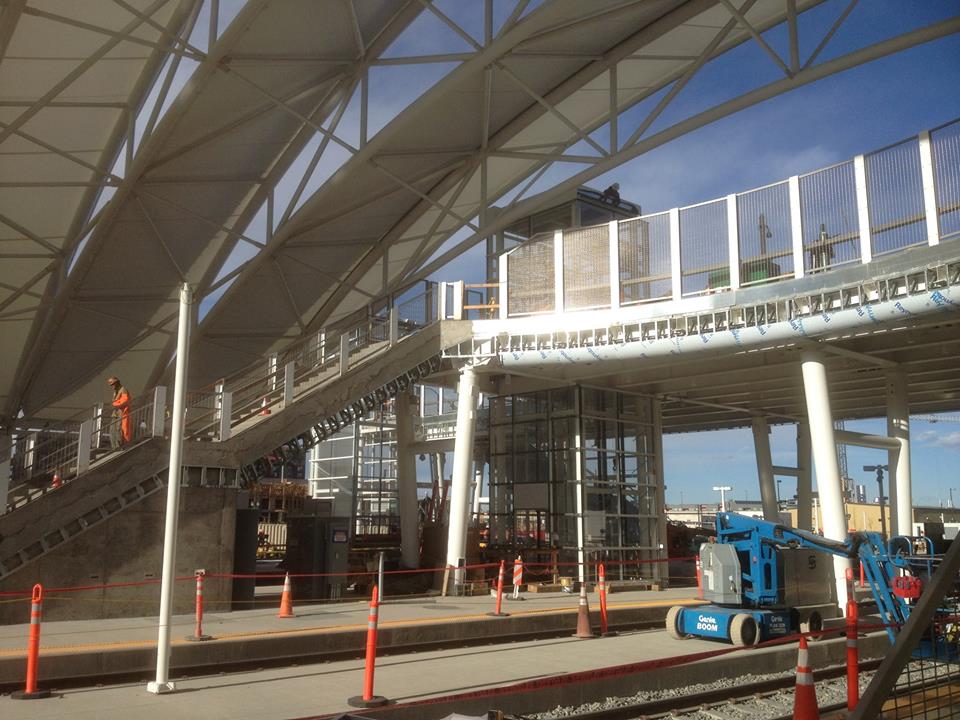 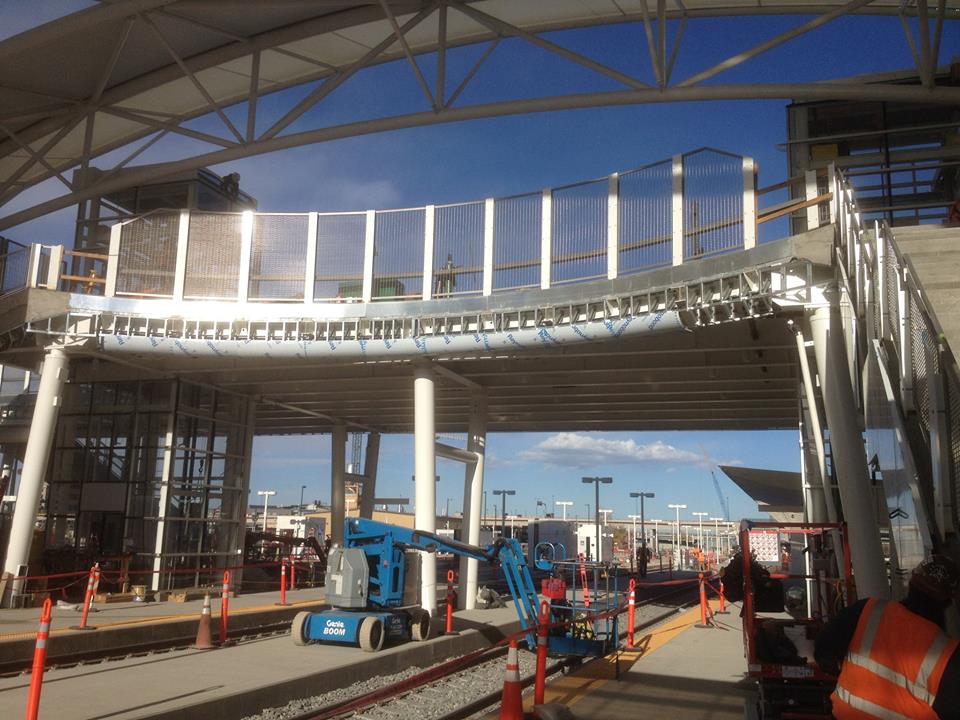 To the right of the photo below, you’ll notice a metal strip at about hip height. This metal piece has lights built in beneath it and will shine light down to the ground, lighting our way. 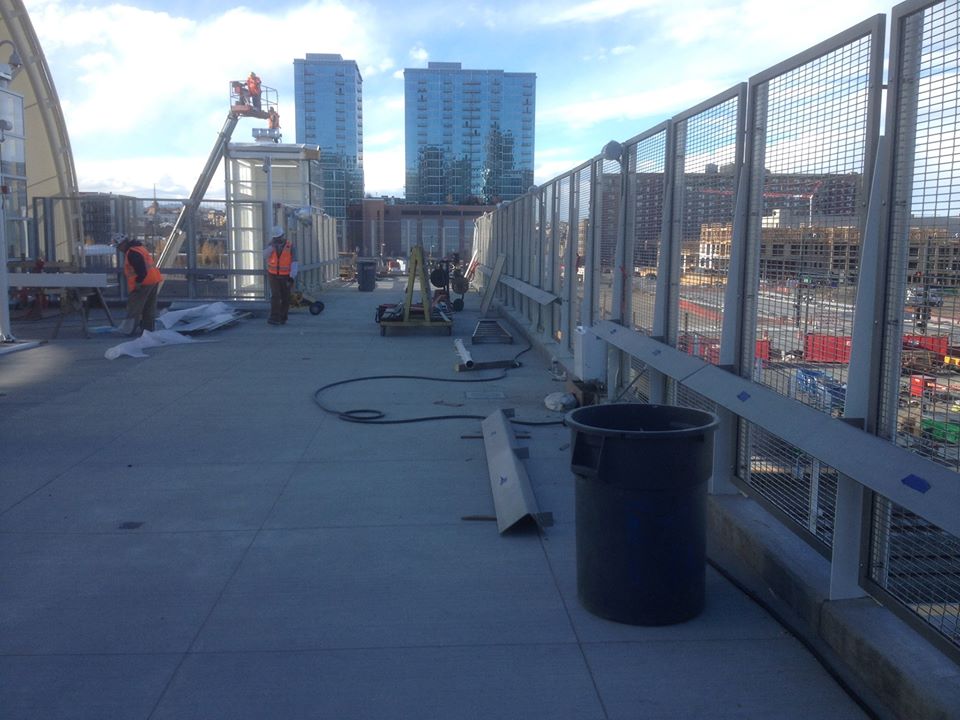 The 18th Street bridge offers some awesome views of the platforms and the canopy. The bridge will empty out onto Wewatta right at 18th Street, providing connections to the massive amounts of development planned for the Central Platte Valley. 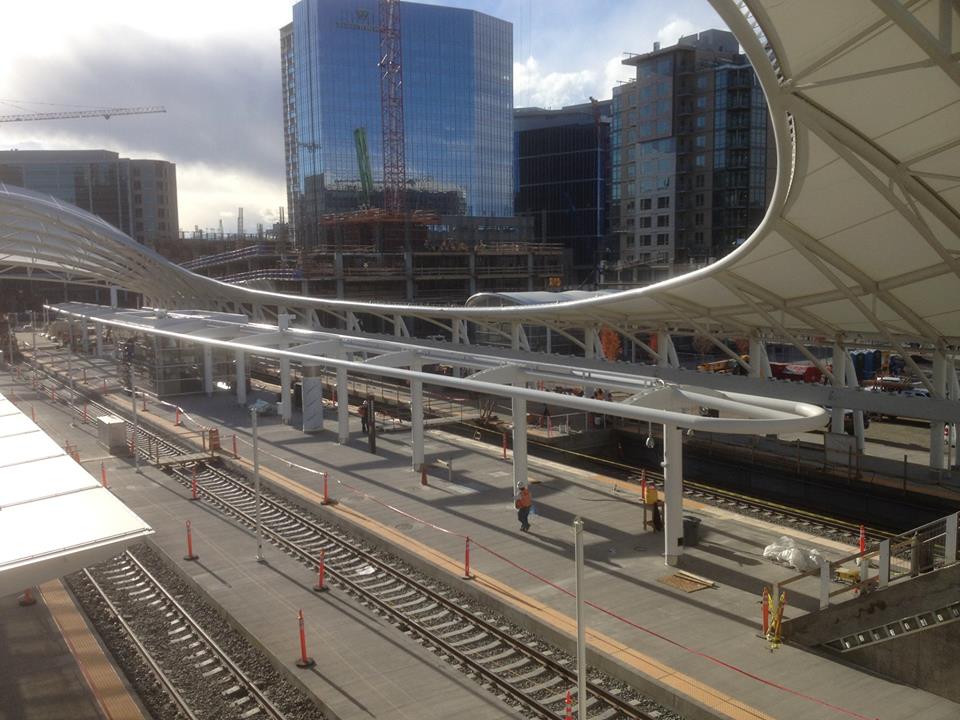 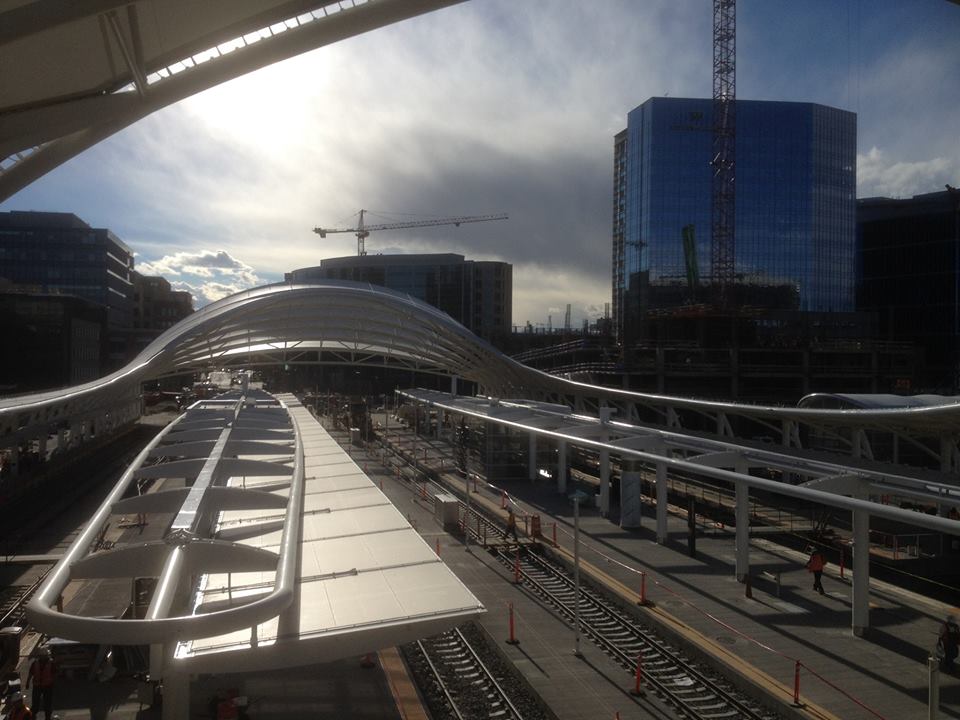 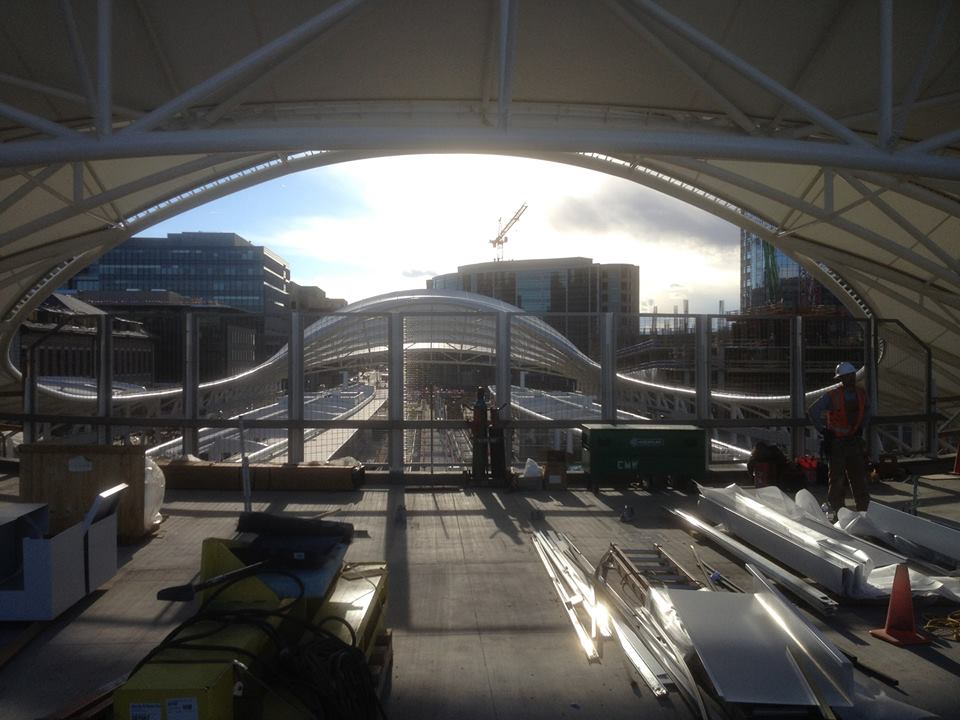 The Union Station Transit Center will be open May 9, 2014!

Next time, we will head downstairs and take a look at the brand spanking new 22-bay underground bus terminal at the Union Station Transit Center!