While downtown Denver is experiencing new population growth at the dawn of the 21st century, a humbling perspective is brought to the forefront when we look at how the city handled growth toward the latter half of the 19th century. Over the past several months, I have been looking into this issue and was provided access to the archives of Central Presbyterian Church, housed at the imposing edifice at 17th and Sherman. Their historical material helped shed light on the amazing story of Denver’s cyclical growth patterns. 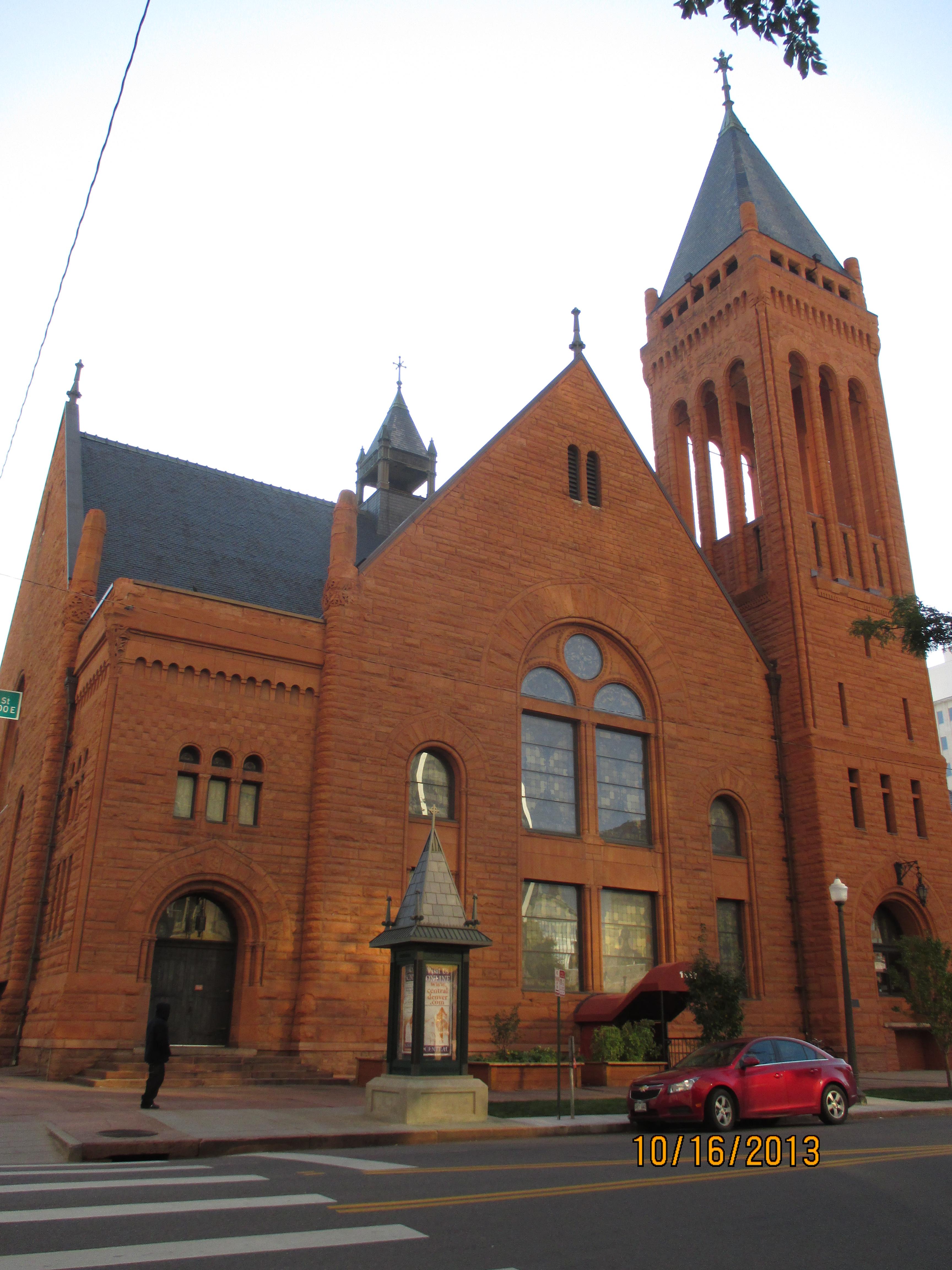 It turns out that Central’s current building, circa 1892, was the third home for the congregation, which had its roots dating all the way back to the city’s earliest days in 1860. When moving to 17th and Sherman, the congregation sought to escape the growing density of downtown and escape to the suburbs (then located in Capitol Hill). At the dedication of this Frank Edbrooke designed building, built on land purchased from Walter Scott Cheesman for $40,000 by Donald Fletcher (founder of Aurora, whose home stood close by at 16th and Grant), church members reminisced about the remarkable growth of Denver over a short period of 30 years.

With the early congregation’s foundation in the First Presbyterian Church on the north side of 15th Street between Lawrence and Arapahoe, the church initially moved to a permanent structure on the outskirts of downtown in 1876—at 18th and Champa. Within 15 years, they needed to move again, not only because the congregation had outgrown its building but because the city was growing yet again and was well over 100,000 people by 1890—increasing from 4700 people only twenty years earlier. At the new church dedication in 1892, members recalled,

“It seems almost incredible, even to those who have been eye witnesses to this progress, that within thirty years the little hamlet upon the banks of Cherry Creek, containing a few log and frame buildings, should grow in this brief period into a city of perhaps more than 150,000 inhabitants.  The first Presbyterian church building, which was situated upon the corner of the alley on F street (now Fifteenth Street) on the ground now occupied by Clayton’s hat store was completed and opened for regular services in the spring of 1865. At that time it was in the midst of scattered dwellings. There were no store or business buildings above Larimer street on F, and none upon Sixteenth street except the Langrishe theater, a frame building on the corner of Sixteenth and Lawrence, where now stands the building occupied by Skinner Bros. & Wright. The business quarter of the town was on Blake, McGaa (now Market) and Larimer, extending from the creek as far as F street and on F from Larimer to below Wazee. Opposite the new church, where the Evans block now stands, was a lumber yard. On the corner of Lawrence and F, where the building stands, which was recently occupied as the post office, was the Overland stage barn and corral. On the corner adjoining the church stood the brick residence of Wiliam Graham, the pioneer druggist. Opposite on Lawrence was the residence of Mr. D. H. Moffat. Mr. George Tritch lived in a white frame house fronting onArapahoe and fifty feet from the corner of F and Arapahoe. Above this were a few scattered dwellings and beyond were the treeless, barren plains…there was not a growing tree on the town site, except along the margin of the Platte, until the spring of 1865 when a few were transplanted by General Pierce and one or two others that were watered by a small ditch conducting water from a spring on Cherry Creek above the present Broadway bridge.”

When the new 18th and Champa location was chosen, it “was at that time far from business buildings, residences lined Lawrence, Arapahoe, Curtis and Champa streets, and as yet there was little business above Larimer Street. It was believed the location would be quite permanent, business might possibly extend up Fifteenth and Sixteenth streets to Curtis, possibly to Champa, but no one dreamed that during the lifetime of the present generation it would go beyond.”  That building was designed by Robert Roeschlaub and had a seating capacity of 1000, making it the largest gathering place in the city. It was used for concerts, lectures, graduation ceremonies and the like for many years. When the church moved to Sherman Street in 1892, their “old” building was sold to the new 23rd Avenue Presbyterian Church on Ogden, where it was physically relocated (and later burned in a fire). 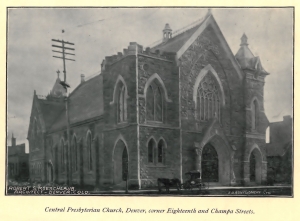 Today, Central Presbyterian Church is one of the few church buildings remaining downtown whose congregation stayed put instead of moving farther out into the suburbs, as many other congregations did after World War II. Its impressive sandstone building stands sentinel over the corner of 17th and Sherman and is one of the few structures remaining from this once residential neighborhood. And while downtown Denver, of which it is now considered a part, is once again growing in population, the church has no plans to vacate its location. This congregation, along with Trinity United Methodist Church, can proudly tie its existence back to the very foundations of the tiny hamlet of Denver over 150 years ago.