Time to take a look at the massive Indiana Bridge over 6th Avenue! Only 6 DAYS until opening!

This bridge is MASSIVE. We’ve taken a look at the bridge before in this DenverInfill post, but it’s time for a final update. 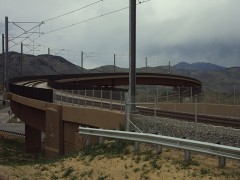 This bridge is located in the single-track section of the West Rail Line on the approach to the Jefferson County Government Center/City of Golden Station. The trains will be running east and west intermittently along these tracks once the corridor opens next week.

The bridge is made of both concrete and steel and is the longest bridge on the corridor, spanning 1,531 feet. The 11-span bridge uses three independent construction frames – the first and third (those spanning the onramps) use a post-tensioned concrete box girder system while the middle span uses three steel plate girders. The center span over 6th Avenue is the longest single span in the corridor, reaching 270 feet. Notice the lack of ballast (rocks) on the bridge – this is done to make the bridge lighter. The tracks are directly fixed to the concrete. This bridge is only 20 feet wide. 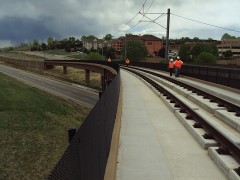 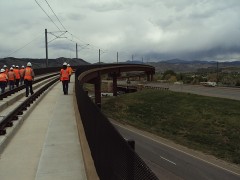 The tallest columns are over 40 feet high, which allows for future construction of a ramp between 6th Avenue to I-70. Like the 6th Avenue Bridge, the Indiana Bridge uses the same “weathering steel” which will rust to a dark purple/brown color.  The 7.2 million pound bridge took 48,000 cubic feet of concrete and 128,000 feet of steel post-tensioning strand to complete. The steel in the frame weighs over 890,000 pounds – that’s 445 tons!!

This bridge is high above 6th and even higher above Indiana Avenue. If you’re afraid of heights, you may want to close your eyes as you travel across the bridge. 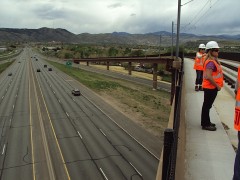 This bridge features a unique construction method. There are rubber ties at either end of the bridge. Of to 40,000 or so railroad ties along the new West Rail Line, about 200 of them are made of recycled rubber. These ties are being tested to see whether they will help spread the weight of the light rail trains out to avoid compaction and settling at the ends of bridges. For more information on these recycled rubber ties, check out this Denver Post article.

Tomorrow, we will take a look at the Jefferson County Government Center/City of Golden Station, the end of the West Rail Line.