Using bike sharing as a viable mode of transportation in the Mile High City just got a lot easier. On March 17th, volunteers distributed hundreds of red Denver B-cycle bikes from their winter nesting spot at 27th and Larimer, where Denver Bike Sharing is headquartered, to 83 stations around Denver. This is an increase of 30 stations from last season and is a ringing endorsement of the success of the Denver’s bike sharing program. Denver’s B-cycle system is growing because it has been well managed with Executive Director Parry Burnap at the helm. Also, the city has provided great support for the network and, above all else, Denver’s healthy, active  residents have embraced the system with open arms since it opened three years ago, as demonstrated by the fact that the red bikes logged their half millionth ride before the end of the 2012 season. 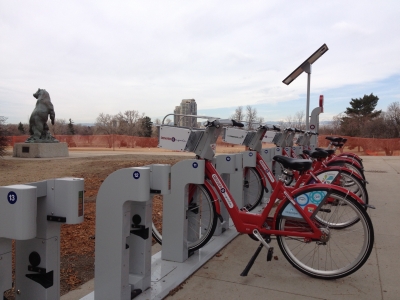 In addition to the 30 stations that will open this spring, Denver Bike Sharing will add at least one more station this summer at 33rd and Arapahoe in the Five Points/Curtis Park neighborhood as part of the redevelopment of the old Denver Horse Barn. That historic structure, which once housed the horses that pulled streetcars along Denver’s roadways before electric cables were added, is being transformed into the new headquarters for Denver Urban Gardens and Engineers Without Borders. The addition of that B-cycle station, courtesy of the Denver Housing Authority, is a fitting tribute to the sustainable transportation history of this historic structure, and brings bike sharing to the northern end of Five Points.

In all, the expansion of the 31 new stations will cost $1,292,351. Twenty-seven of the stations were funded through grants from the Federal Highway Administration and the Colorado Transportation Commission with matching grants from the Anschutz and the Gates Family Foundation and other local foundations. Four of the stations: the Denver Zoo, Denver Museum of Nature and Science, Auraria Campus, and the aforementioned historic Denver Horse Barn location, were paid for with money from the Walton Family Foundation, the Piton Foundation, Encana, the Denver Zoo, the Denver Museum of Nature and Science, the Auraria Campus Sustainable Campus Program, and the Denver Housing Authority.

Courtesy of Denver Bike Sharing, here is the full system map with existing B-cycle stations in blue and the new stations in red. The second map is a close-up of the Downtown area. Click/zoom to embiggen. 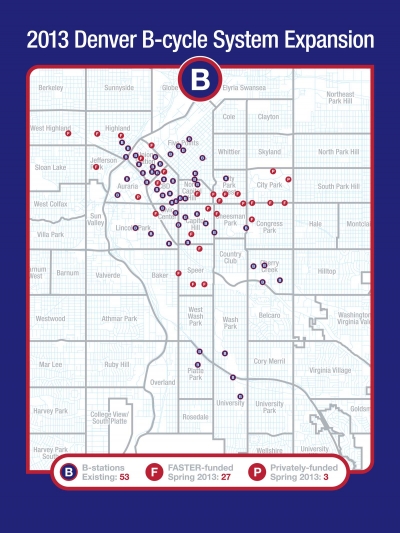 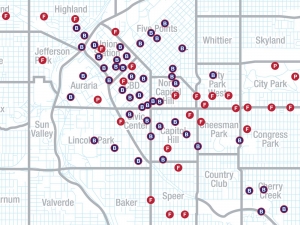 One can see a grouping of new stations along East 17th Avenue to serve the densifying, vibrant Uptown district and City Park. City Park’s two new stations at the Denver Museum of Nature and Science and the Denver Zoo are in response to consistent demand for stations in the park by Denver B-cycle customers. Bike to City Park Jazz anyone? Similarly, new stations are opening along West 32nd Avenue at Clay and Julian to meet the growing demand in West Highland. The addition of a station on South Broadway at 1st Avenue, will be welcomed by the busy South Broadway commercial district.

The expansion stations are generally placed near one another because, according to Dr. Andy Duvall who studies bike sharing systems around the world and was instrumental in the creation of Denver’s system, people in Denver are generally willing to walk three to four blocks to a station. So, placing the stations within eight blocks of each other creates the critical mass necessary to make the system viable. This can be frustrating to Denver neighborhoods farther from Downtown that are waiting for the arrival of stations in their neighborhoods, but Denver Bike Sharing is committed to continuing the expansion into outer Denver neighborhoods as funds and demand justify the expansion. The nature of bike sharing requires that the expansion happen in a concentrated manner to avoid creating distant “island” stations that get little use.

As bike sharing continues to expand and the number of citizens choosing bikes for commuting continues to grow, Denver will be faced with the challenge of building out our bicycle  infrastructure to meet this demand. The recent Denver B change petition that garnered over 1,000 signatures calling for a vertically separated bicycle facility on 15th Street through Downtown is an indication of pent up demand. I am confident that Mayor Hancock, Denver City Council, Denver’s new Public Works manager and Chief Sustainability officer are ready to meet this challenge and accelerate the implementation of a network of protected bike lanes to serve all those happy, healthy people riding sustainable red bikes through Denver in the years to come.