It wasn’t too many years ago that transit was an afterthought in the United States. For years at a time in the latter half of the 20th Century only a handful of US cities were actively building new transit lines at any given time.

But as this map from national transit blog The Transport Politic shows, the times, they’re a-changin’. 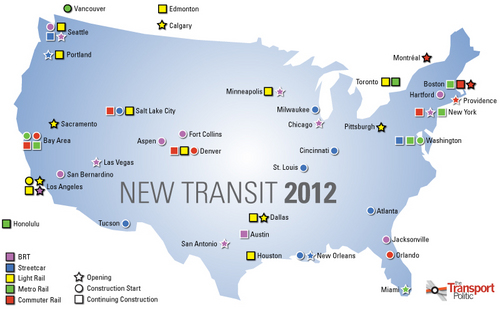 Major transit openings and construction starts planned for 2012.
Image by Yonah Freemark on The Transport Politic.

The map was published as part of an extensive post that lists every major transit line in the US that will either open or be under construction in 2012.

The list is impressive. Nearly every major metropolitan area in the country is represented, and even more would be if the list included projects in the planning stages but not yet slated to begin construction.

The listed projects range from the gargantuan to the mundane. The five map icons in Colorado indicate the continuing progress of RTD’s FasTracks, plus BRT lines under construction in Fort Collins and Aspen.

Our country still has a long way to go before the decades of automobile-focused planning are fully repaired. Even this list, impressive as it may be, is short compared to the highway construction list from most individual states. But still, we’re making progress as a country. We’re doing things now that we weren’t doing a few decades ago. Transit is reaching more people, in more places.

So let’s congratulate ourselves for a solid step forward. But let’s not be too happy; there’s still much work to be done.