During a recent trip to Brighton England, a sea-side town an hour south of London, several interesting bicycle infrastructure treatments caught my eye. Over the next week I will show how these treatments could be useful in Denver.

Denver already has shared paths for bicycle and pedestrian, however they are not well marked, decreasing their safety and usefulness. On Denver’s bicycle maps these routes are called multi-use paths. Examples include 20th Street from Coors Field to Central Street linking Highlands to Downtown, and the sidewalks between the Webb Building, 15th Street and Colfax, an important link between the new Bannock Street Cycle Track and Downtown.  Both routes provide connectivity, but one would pretty much have to look at the city bike map to know they exist. Poor marking of shared-use paths lead to conflicts between pedestrians and cyclists, and it makes enforcement of non-shared sidewalks more problematic.  If some sidewalks are shared and some sidewalks are not, then clear designation tools are essential.  Holding the public responsible for knowing which sidewalks they are allowed to ride on and which sidewalks are off limits is difficult if one can’t tell the difference between the two. For instance, the sidewalk on the north side of Buchtel Blvd. between DU and Franklin Street is a shared use path, but not a single sign or pavement marking indicates this.

Below are photos of the sidewalk path in front of the Webb building.  Currently half is designated for cyclists and half of pedestrians but the markings are small and unclear. 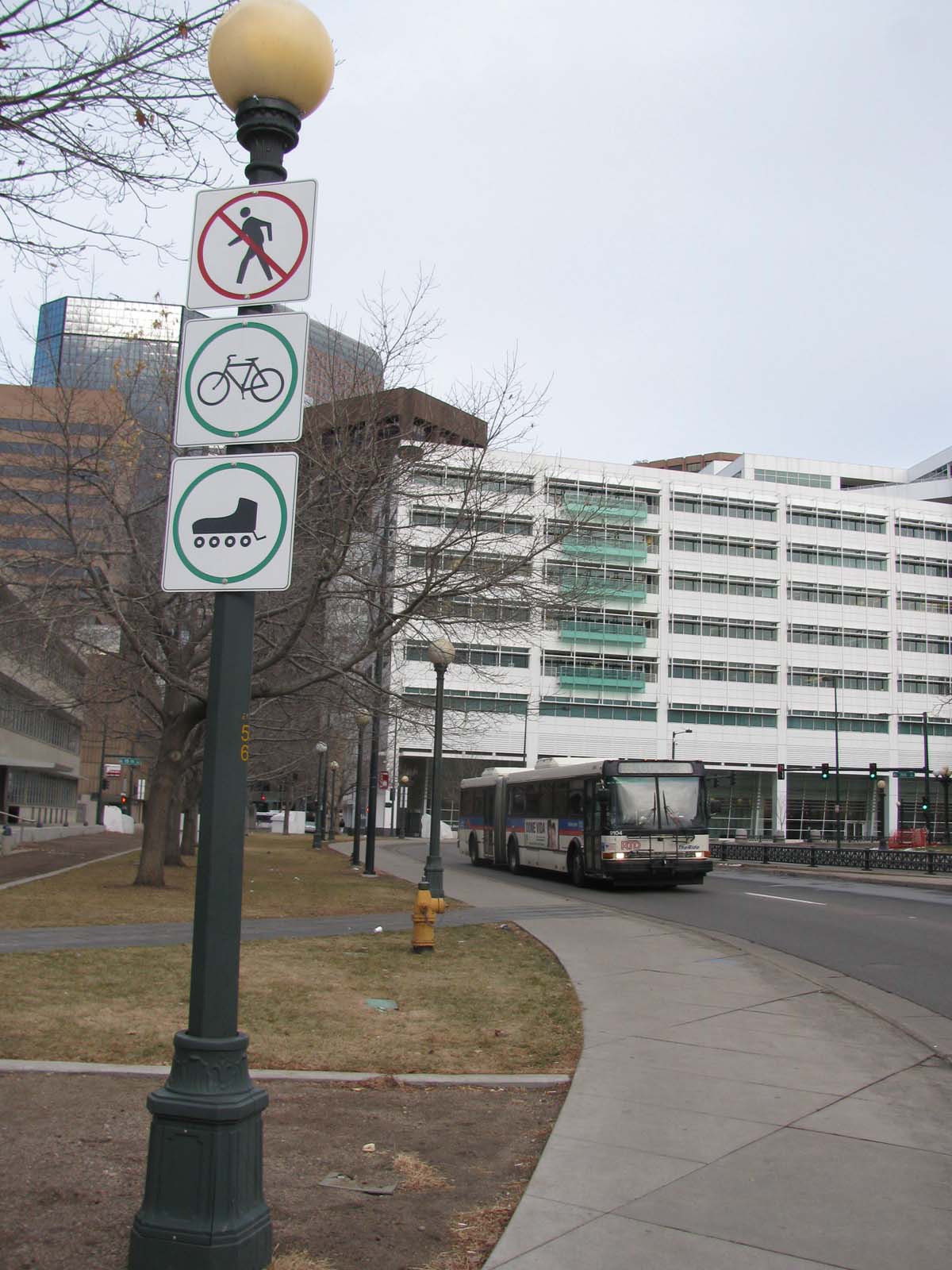 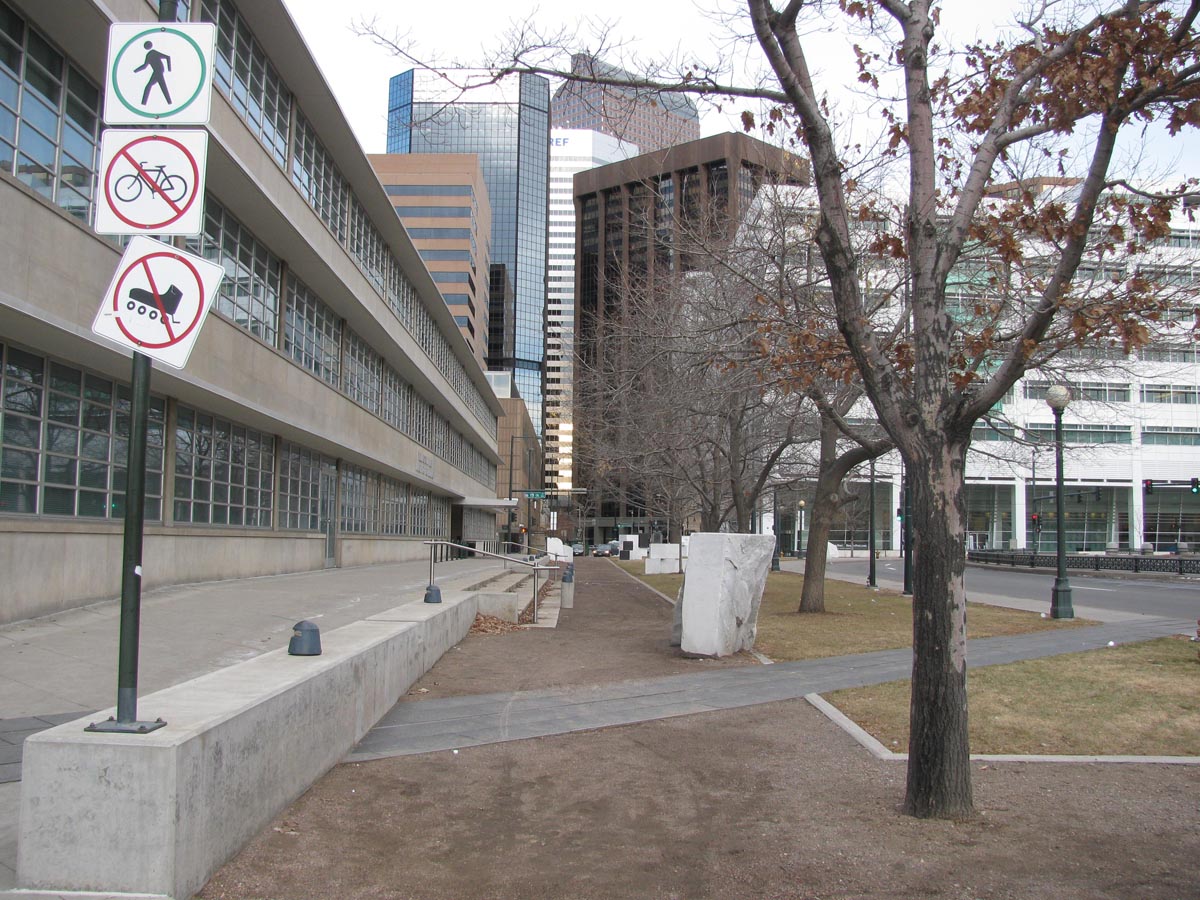 In Brighton, and many other places around the world, simple signage and pavement markings have been used to indicate a shared-use path, thus providing greater connectivity and reducing the chance of conflict between pedestrians and bicycles.

Below is a photo of the Brighton beachfront path shared by bicycles and pedestrians. 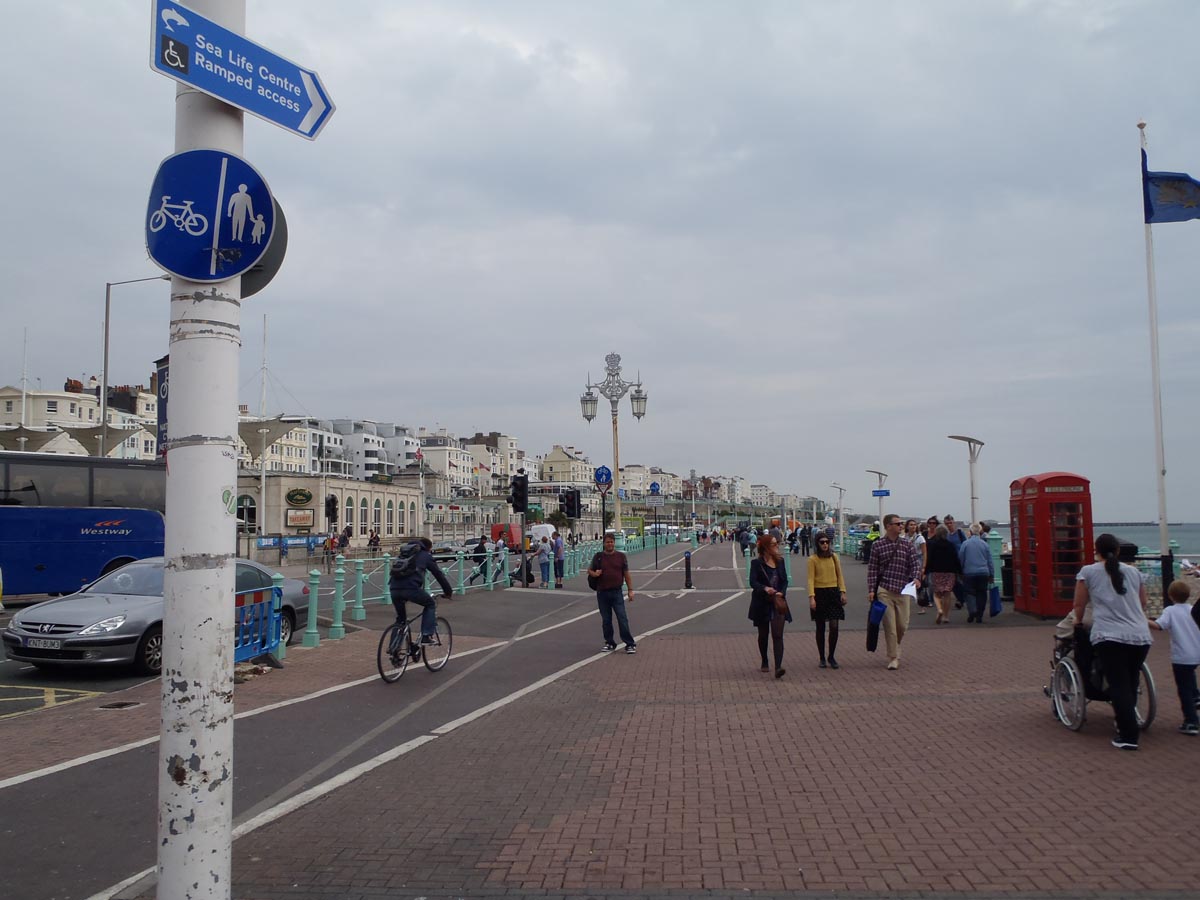 1, A circular blue sign clearly designating that this space is shared by pedestrians and cyclists.

Above  is a photoshop images of the Webb building sidewalk with pavement markings like that used in Brighton.  It’s easy to see how this could help increase connectivity and decrease conflict between cyclists and pedestrians in this and other locations.

While there will be a cost to increasing the use of pavement markings and signage, think of the number of miles we mark for automobiles.  Think of the paint on Colorado Blvd. alone. Allocating resources to clearly sign and mark a limited number of shared-use zones for pedestrians and bicycles is a good investment in health and safety by comparison.