Very exciting news coming from the Department of Transportation (DOT) and Federal Transit Administration (FTA) in Washington, D.C. regarding FasTracks!

As you may have heard, RTD has been awarded a $1.03 billion (with a B) federal grant known as a Full Funding Grant Agreement (FFGA). The funding will go towards RTD’s Eagle Project which is made up of the East Rail Line (Denver Union Station to DIA), Gold Line (Denver Union Station to Arvada and Wheat Ridge), the Northwest Electrified Segment (Denver Union Station to 71st and Lowell) and a commuter rail maintenance facility (CRMF). The project is split into two different phases – phase 1 being the East Rail Line and the CRMF and phase 2 being the Gold Line and Northwest Electrified Segment. Check the map out below to get a better idea of the scope and breadth of the Eagle Project. 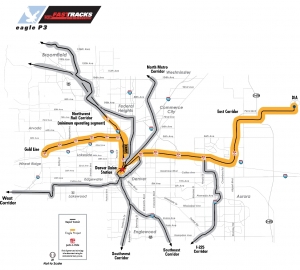 In addition to kick-starting construction of Phase 2 of the Eagle Project, the FFGA will allow the remaining $305 million in the FasTracks budget to move forward. Details surrounding the remaining $305 million were detailed in an earlier post of mine and can be found here. These include a segment of both the I-225 and North Metro Rail Lines, work on the US 36 Corridor, as well as engineering work to move the extensions of the existing light rail corridors closer to construction. It’s important to keep in mind that this money was expected within the FasTracks financial plan, meaning that it doesn’t help diminish the $2.5 billion(ish) funding gap that RTD has on the project as a whole. Next steps in dealing with that funding gap will be forthcoming from RTD.

The FFGA will be signed and finalized on August 31. The corridors included in the Eagle Project are nearly fully designed, meaning major construction work will be visible within the next year following utility relocation and other preliminary construction work.

On a (somewhat) related note – keep in mind this is the last weekend of light rail closures to help ready the system for the new Denver Union Station light rail platform. This weekend, however, light rail will be shut down between the I-25/Broadway Station and the Theatre District/Convention Center Station. D Line service will be available into Five Points this weekend during the closure and bus service will help connect passengers between I-25/Broadway and the Theatre District/Convention Center Station. The rest of the light rail system will also be in operation to the south of downtown. All of these closures will end Monday morning when the new light rail platform will be open for all passengers. RTD will celebrating this very important milestone during Monday morning’s commute.