It’s time for another 14th Street Initiative update. For those of you unaware, the 14th Street Initiative is the $14 million reconstruction of 14th Street in Downtown Denver, which runs through the Theatre/Convention Center district and links the Lower Downtown and Civic Center districts. Basically, 14th street is going on a road diet, losing a vehicle lane while gaining a bike lane, wider sidewalks, new landscaping and signage, pedestrian amenities and lighting, and an entirely rebuilt road bed. For our initial report on the project, check out this post from November 2009 (including a very cool fly-through video), as well as my first update post after construction began, from March 2011. The 14th Street Initiative is another great example of Denver’s ongoing efforts to shift the balance of how we use the public right-of-way (particularly in our urban core) from automobile-oriented to a multi-modal, pedestrian-friendly approach. Let’s take a tour from this past weekend…

Left: Improvements on the block between Market and Larimer.
Right: The now-shorter pedestrian crossing at Larimer Square (just 12 steps!), thanks to the new bulb-outs. 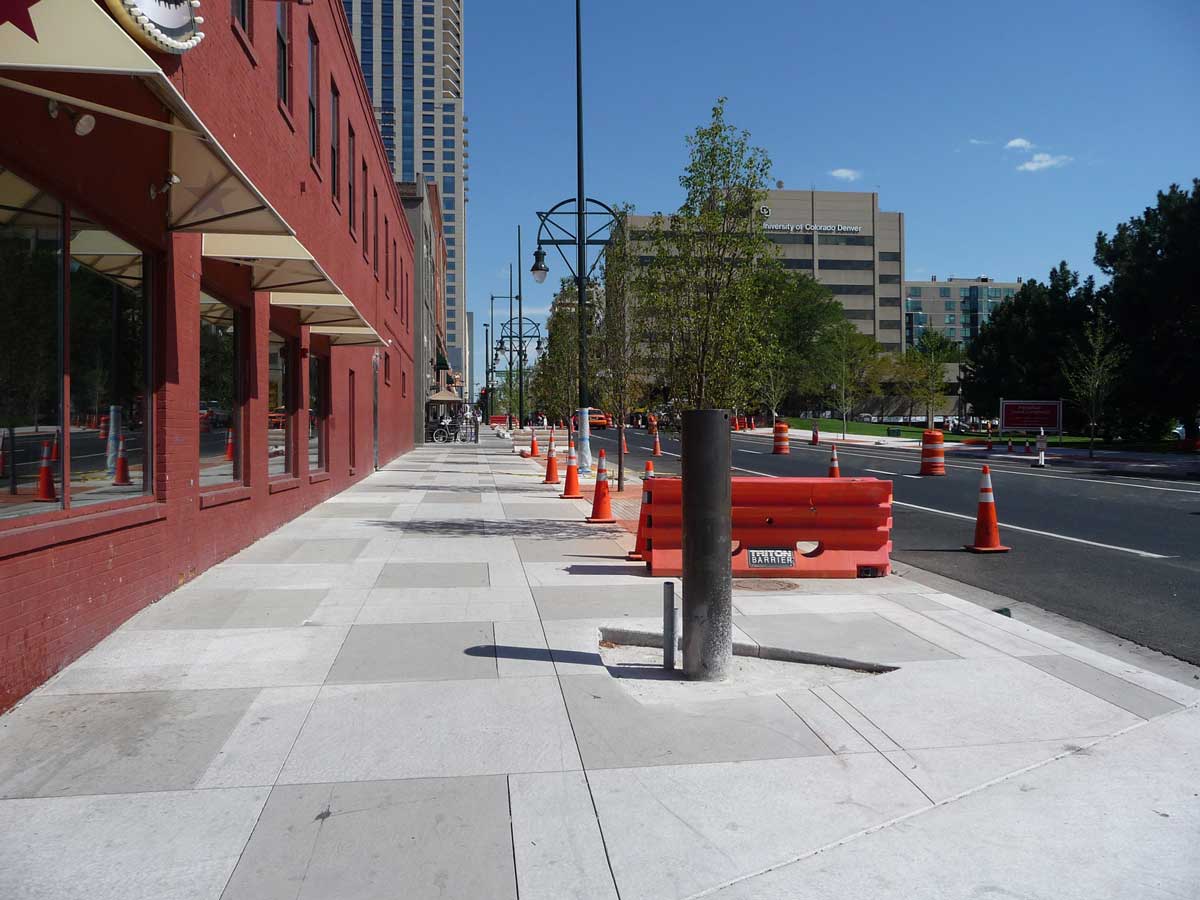 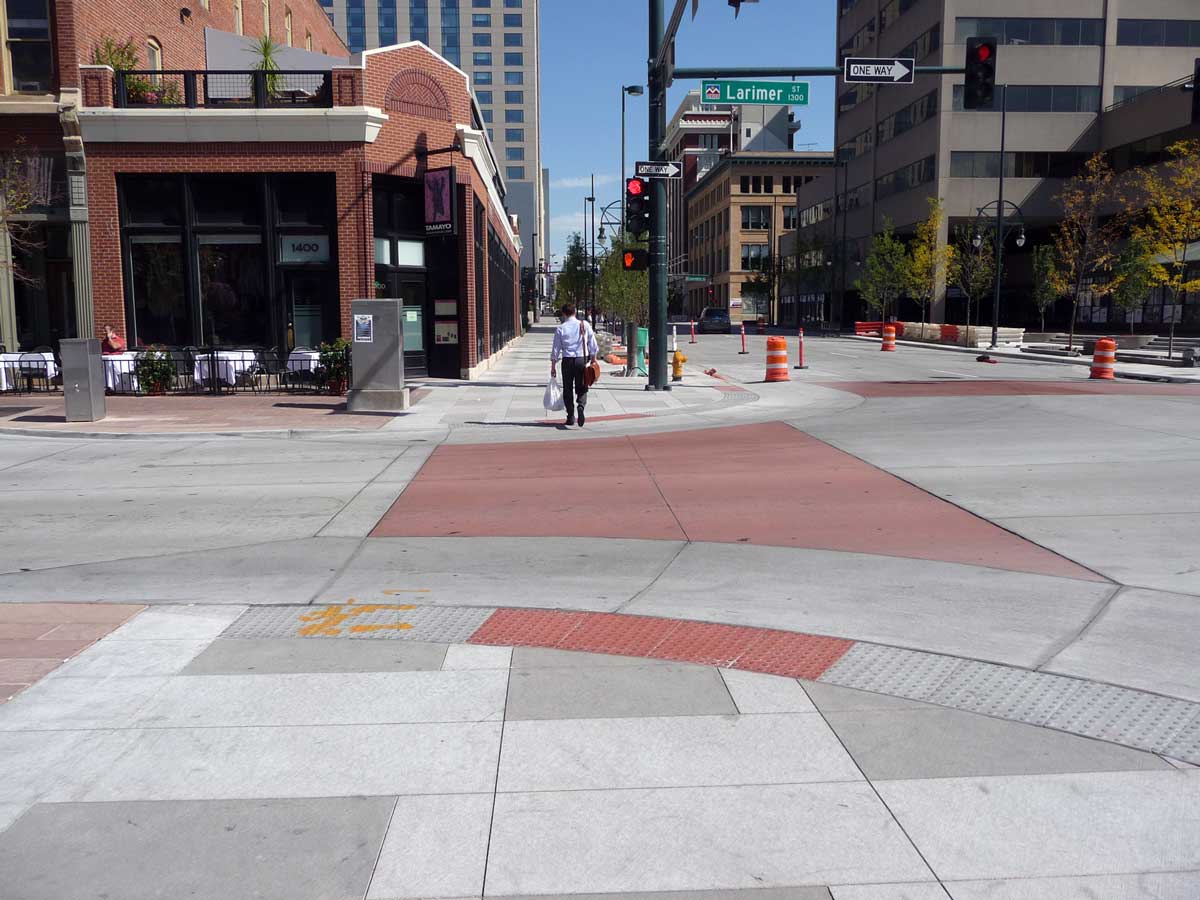 Left: Newly installed trees between Larimer and Lawrence. I’m impressed with the project’s commitment to plant larger trees to produce an immediate “shade dividend.” These are 3-inch caliper trees; some of them are upwards of 15 feet tall.
Right: More trees and granite streetscape elements between Lawrence and Arapahoe. 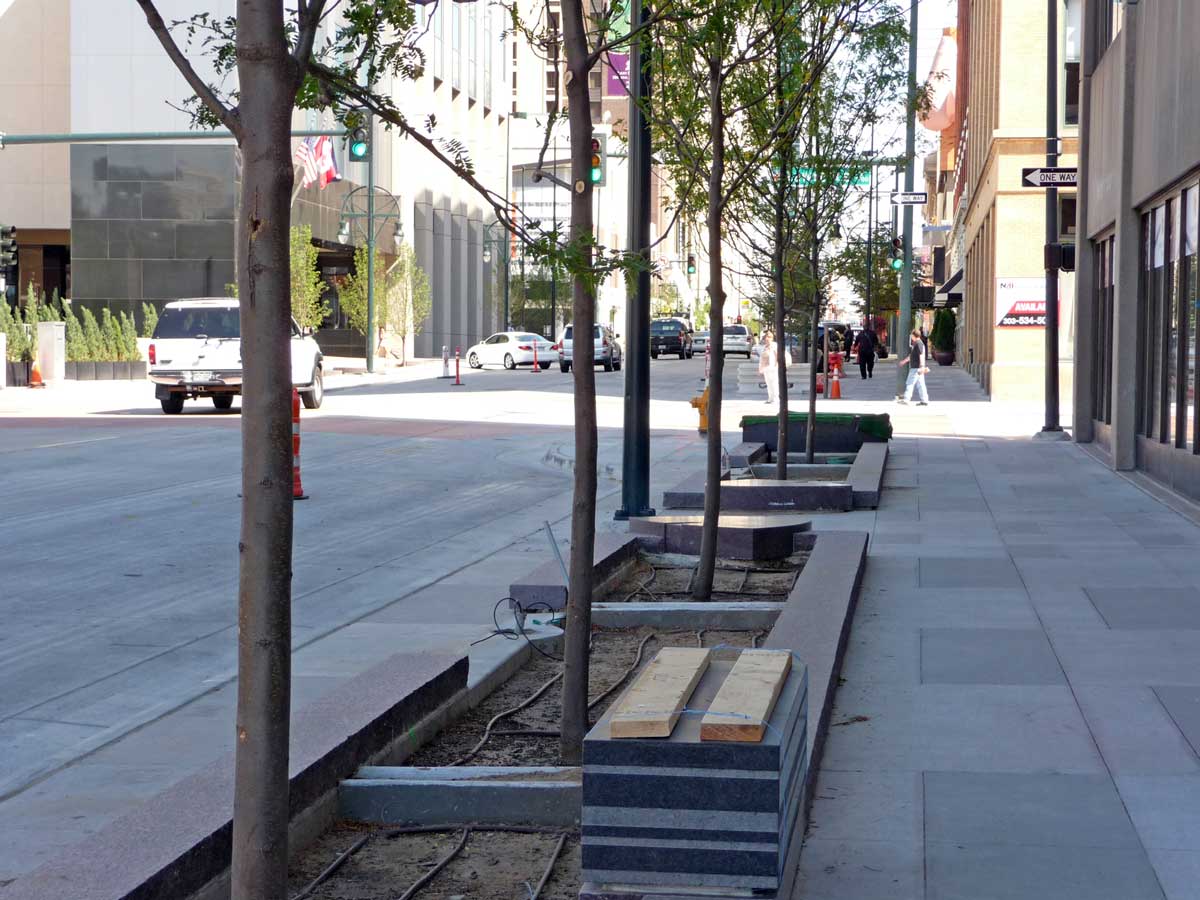 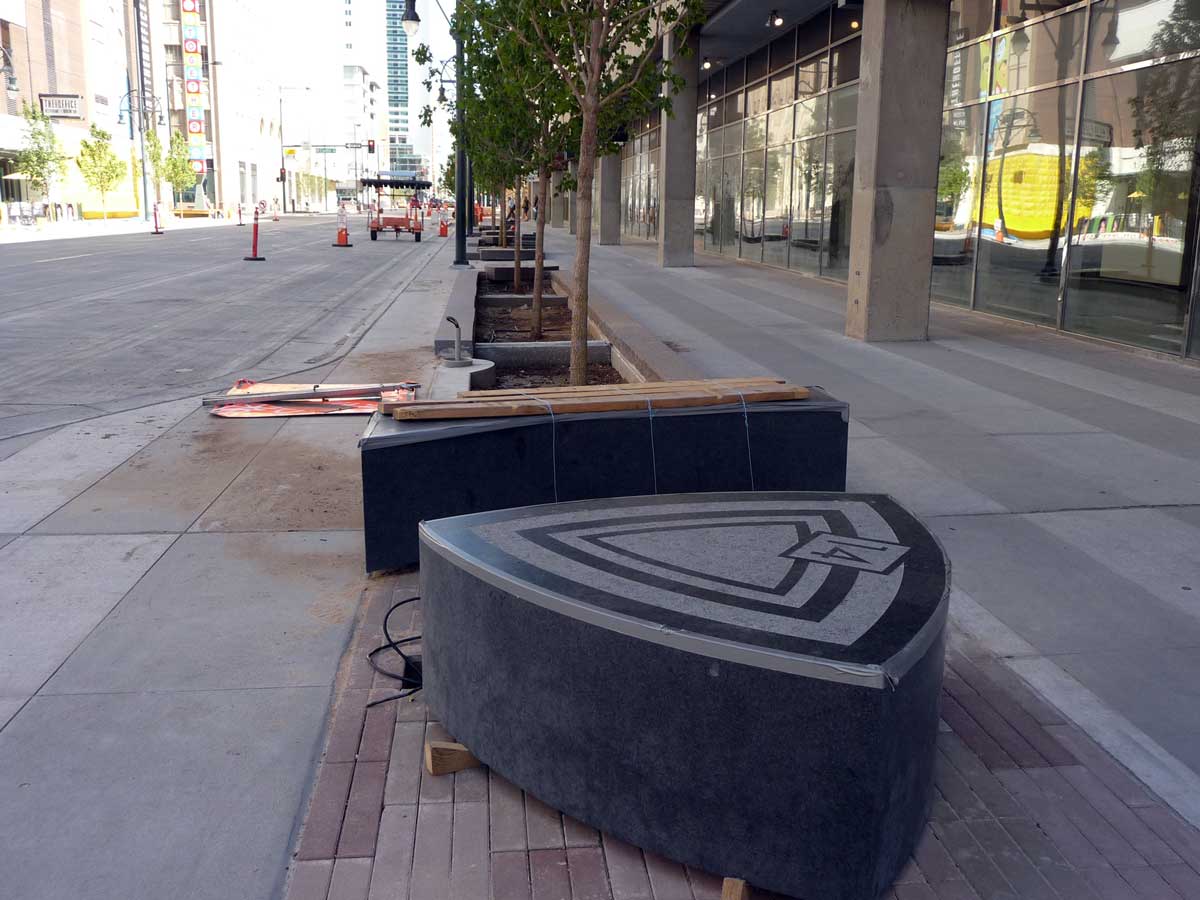 Left: At 14th and Arapahoe, workers getting ready to install the the special wayfinding monument that will eventually anchor every corner along the corridor.
Right: The Arapahoe corner monument awaiting installation (it was in place by not long after this photo was taken). 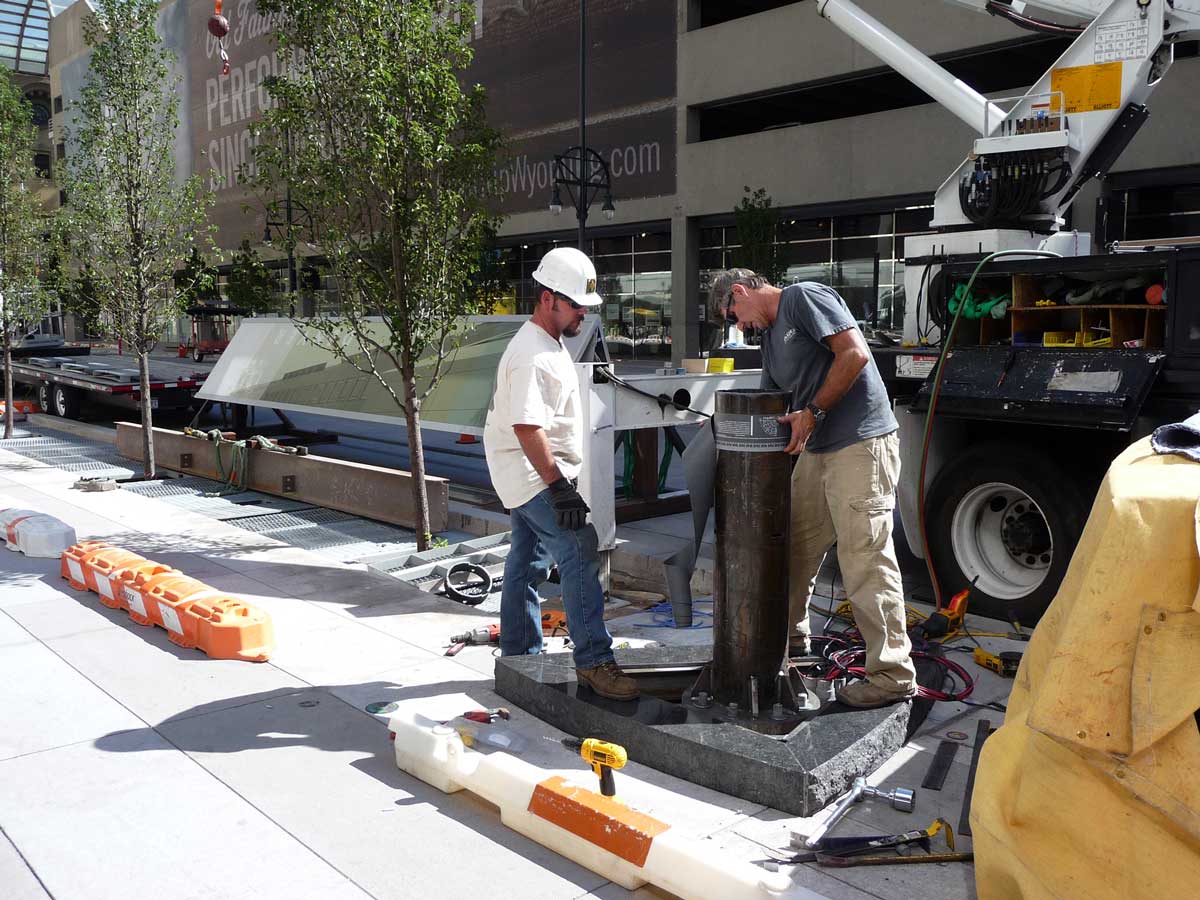 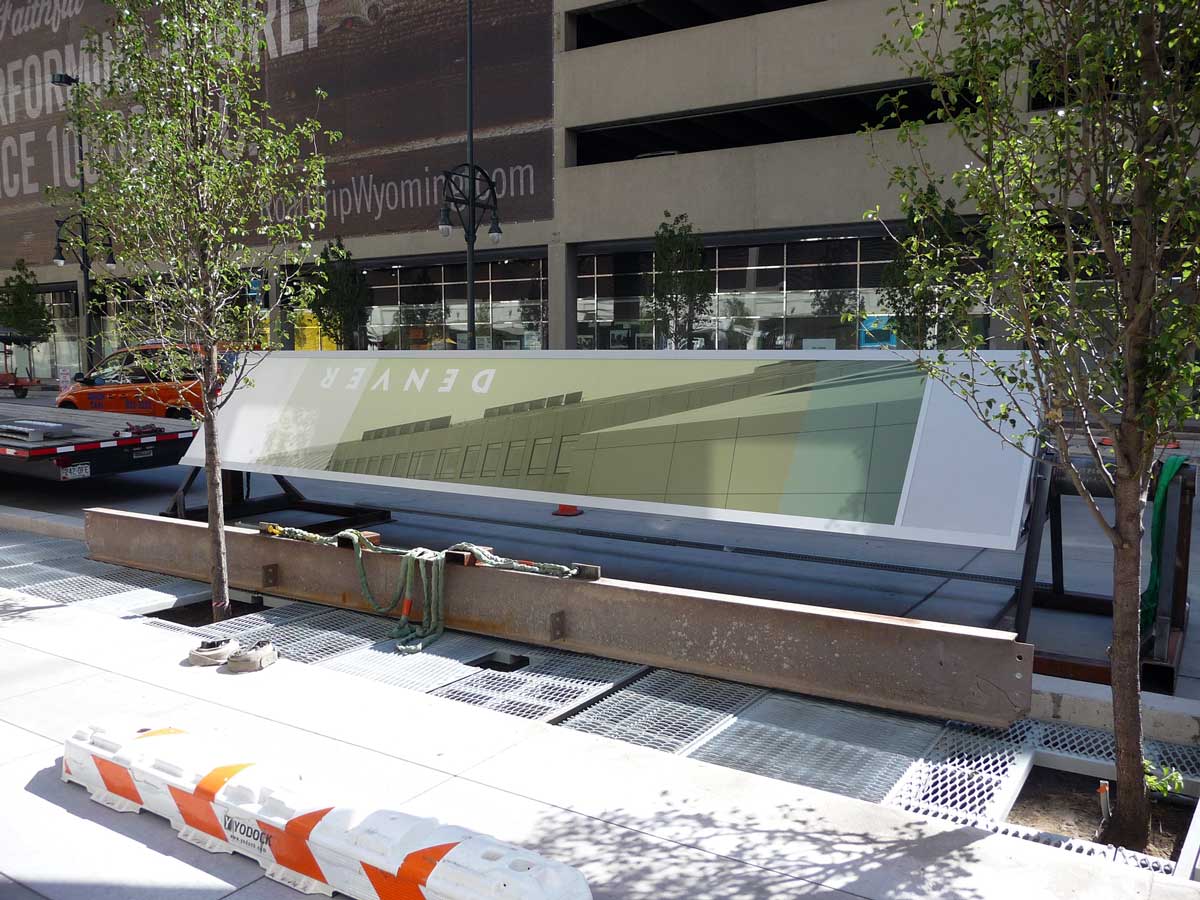 Left: New shorter and enhanced crossing at the entry to the Denver Performing Arts Complex.
Right: Wider sidewalks provide additional room for cafe patios, like this one at the Corner Office. 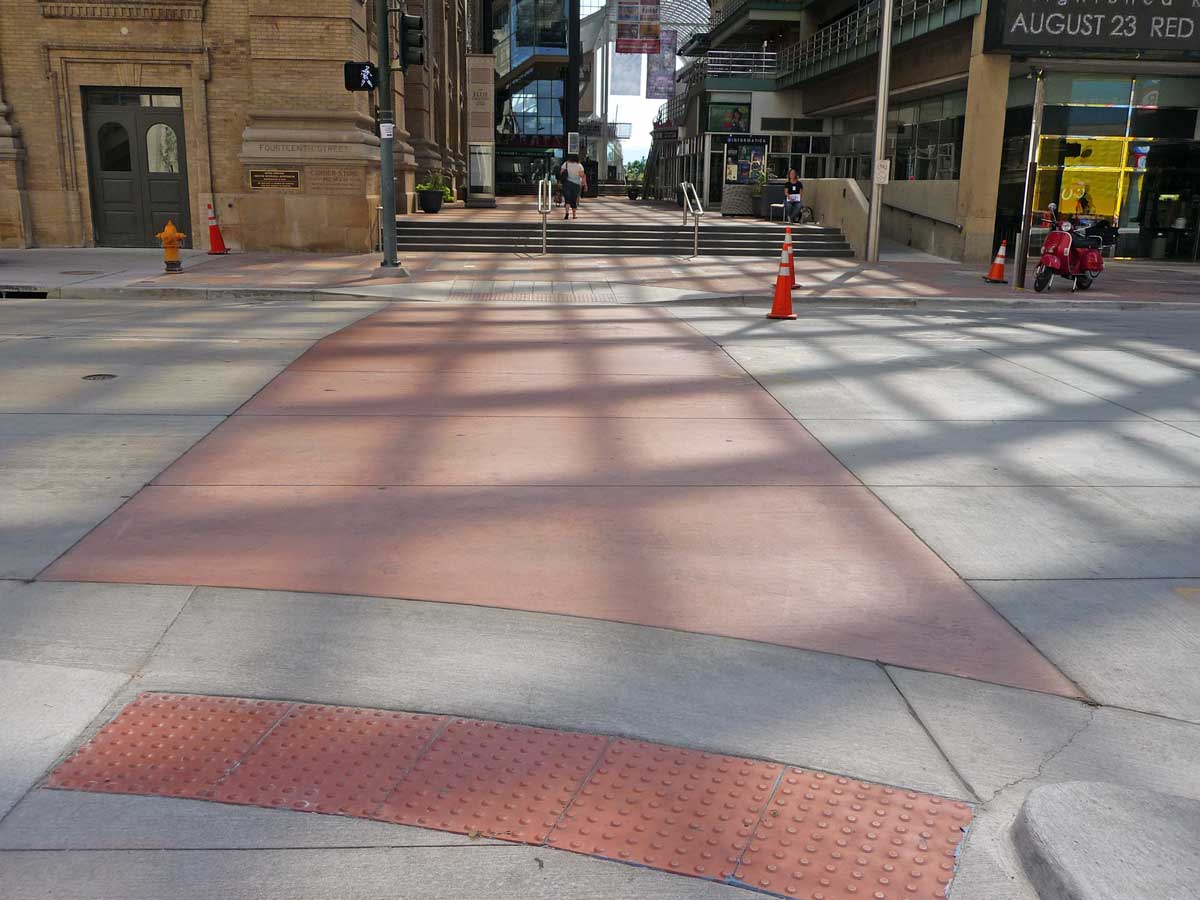 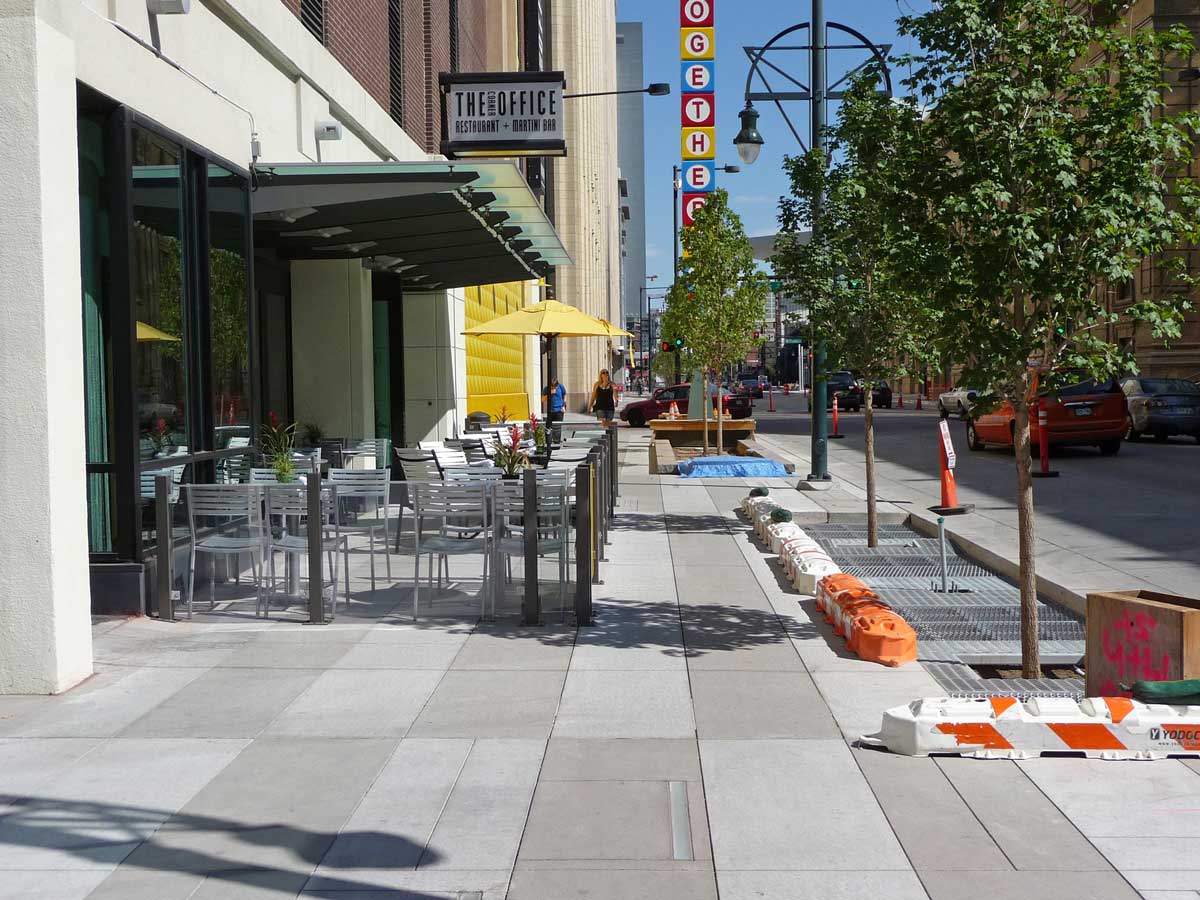 Left: Raised landscaping beds between Curtis and Champa, with a Denver B-Cycle “bike redistribution vehicle” in the background.
Right: New accent lighting embedded into the sidewalk. 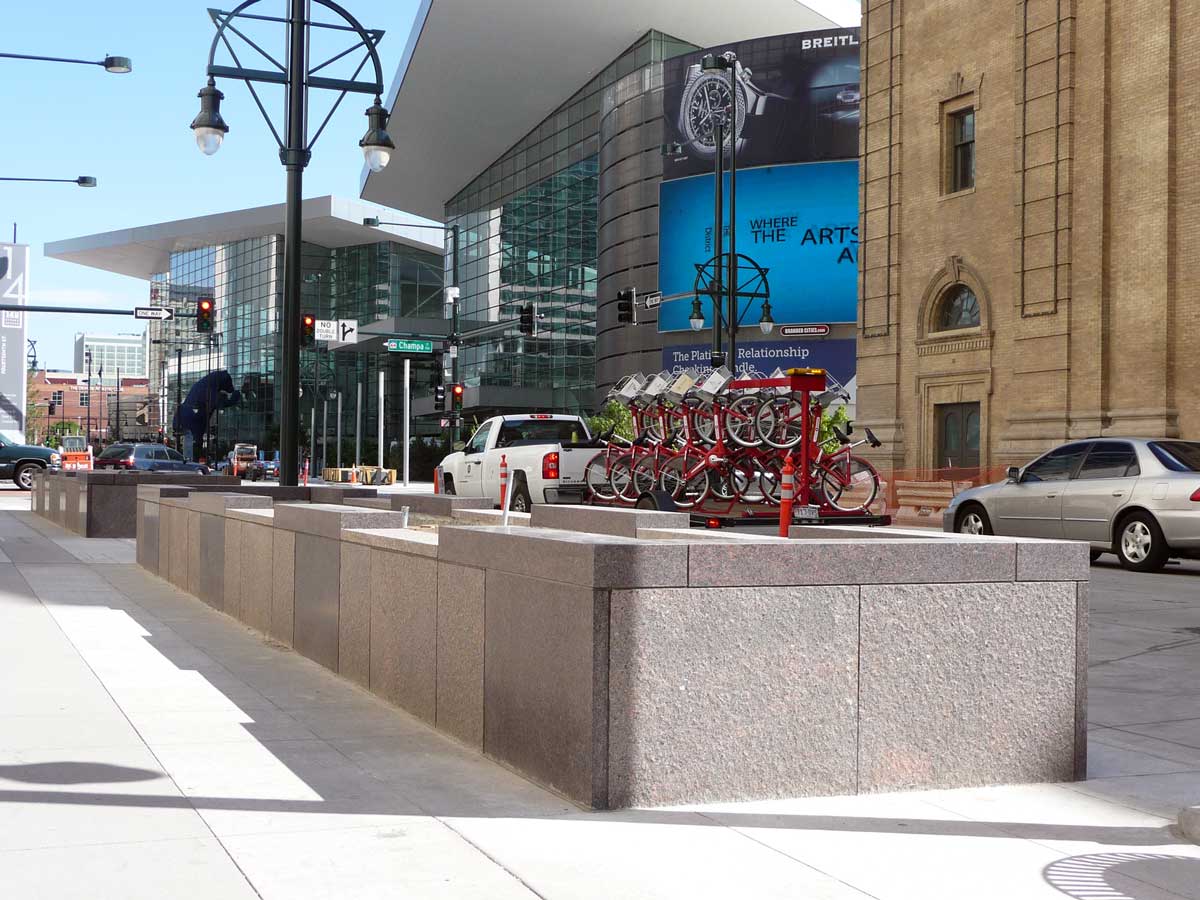 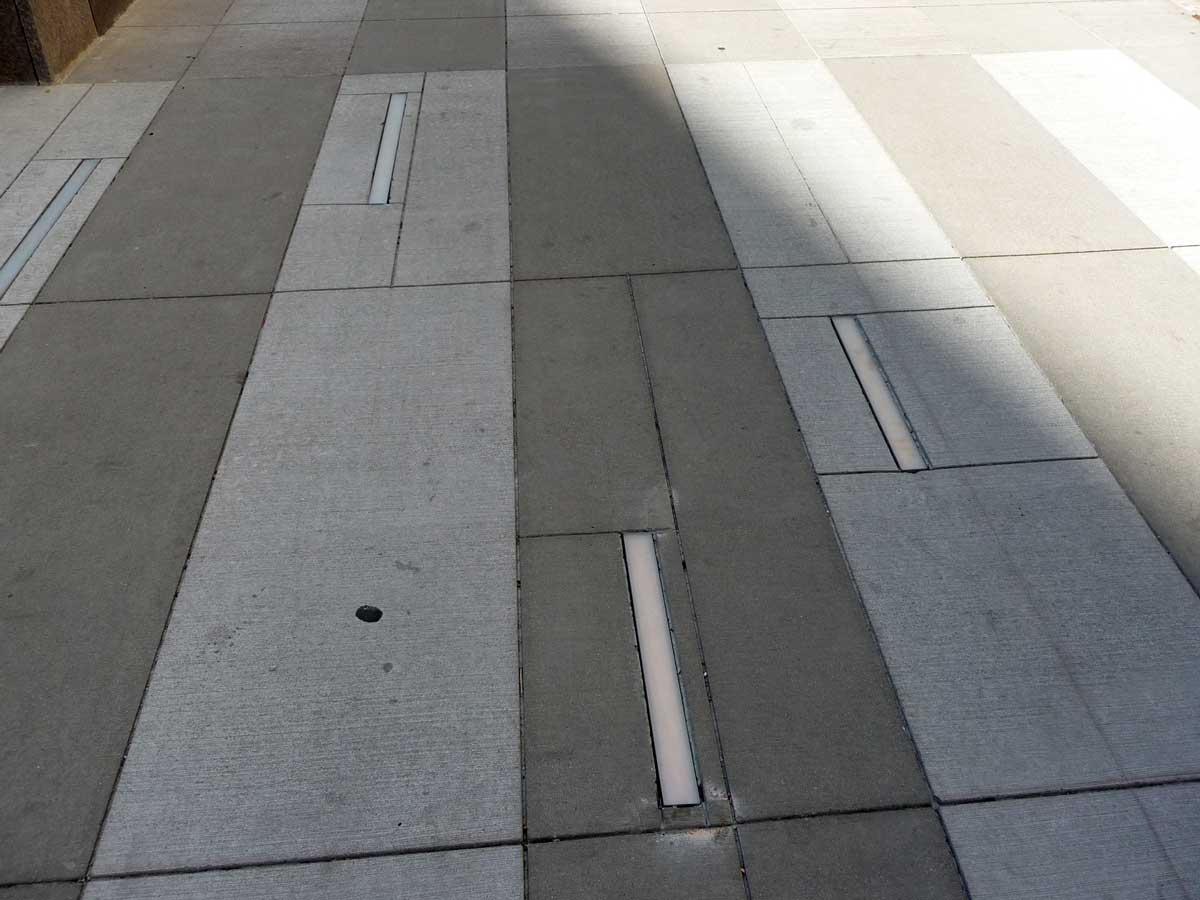 Left: The first corner monument set in place about two weeks ago, at 14th and Champa.
Right: Brick pavers being installed that allow storm water to seep into the tree vaults below. 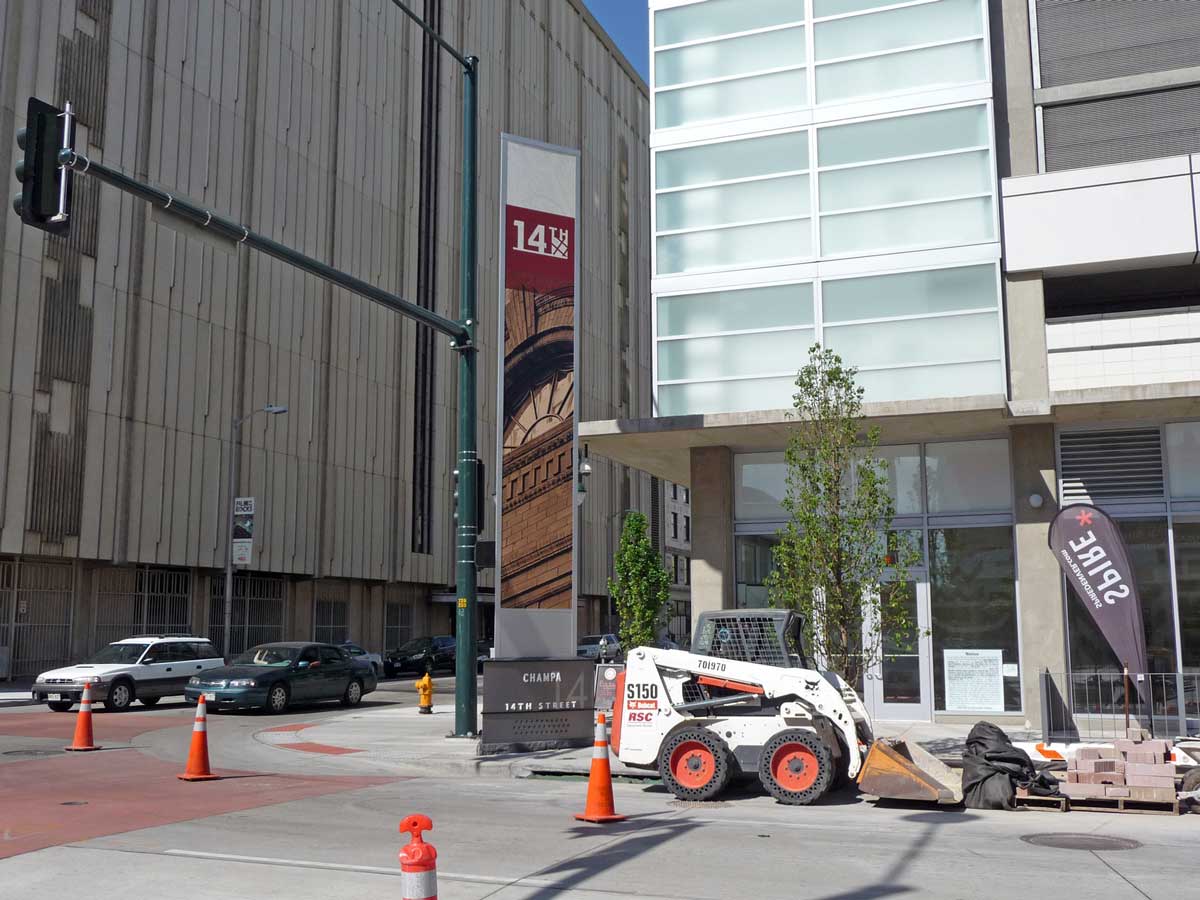 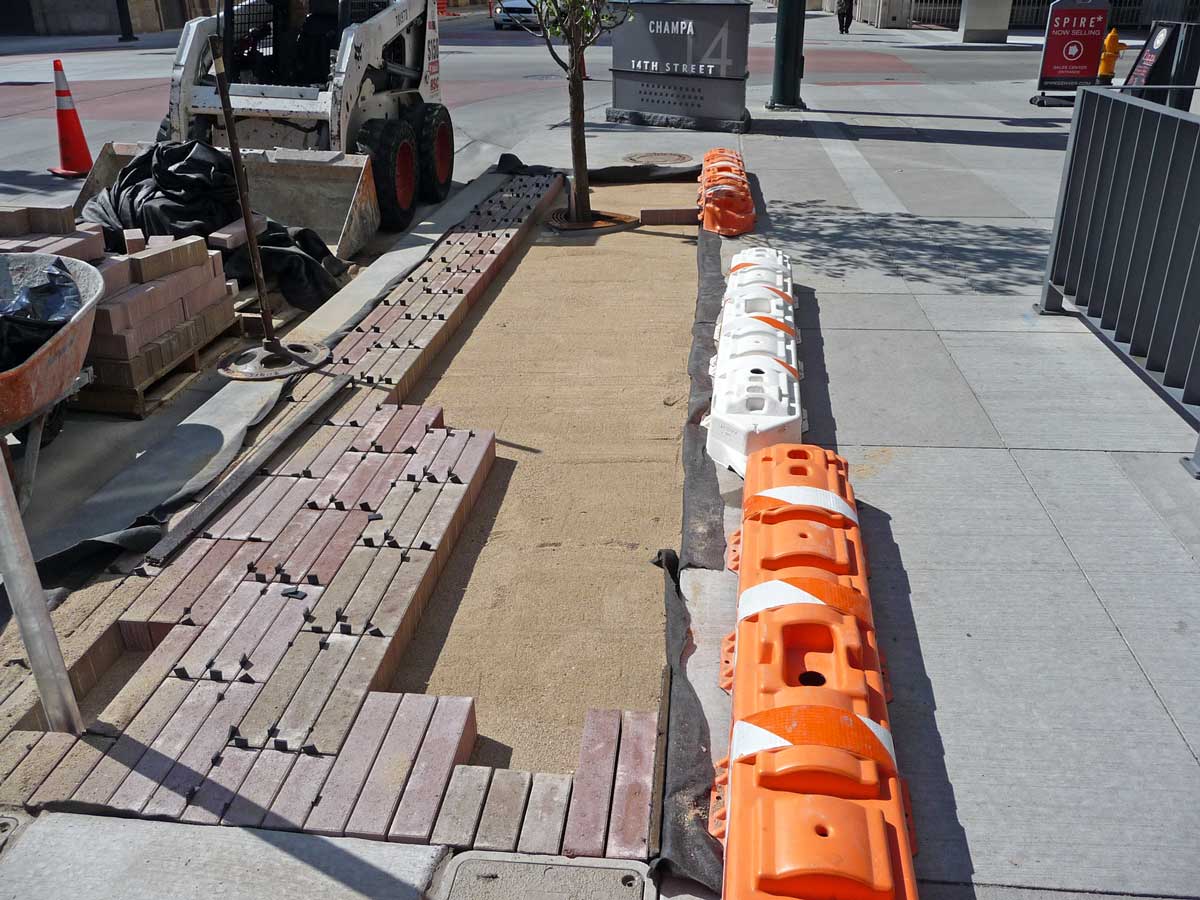 Left: Better defined crosswalks improve pedestrian safety at the complicated 14th/Stout/Light Rail intersection.
Right: A shorter walk across 14th Street for visitors going between the Hyatt and the Convention Center. 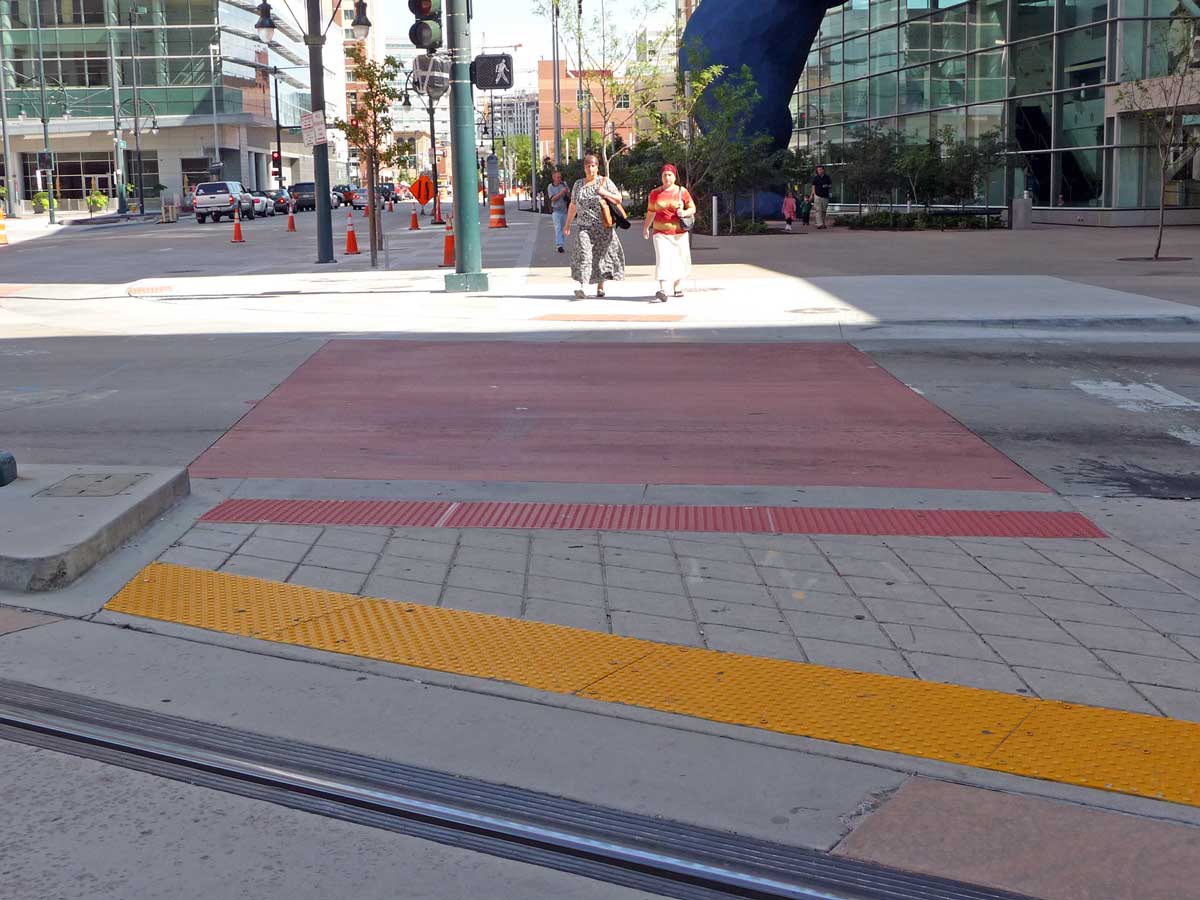 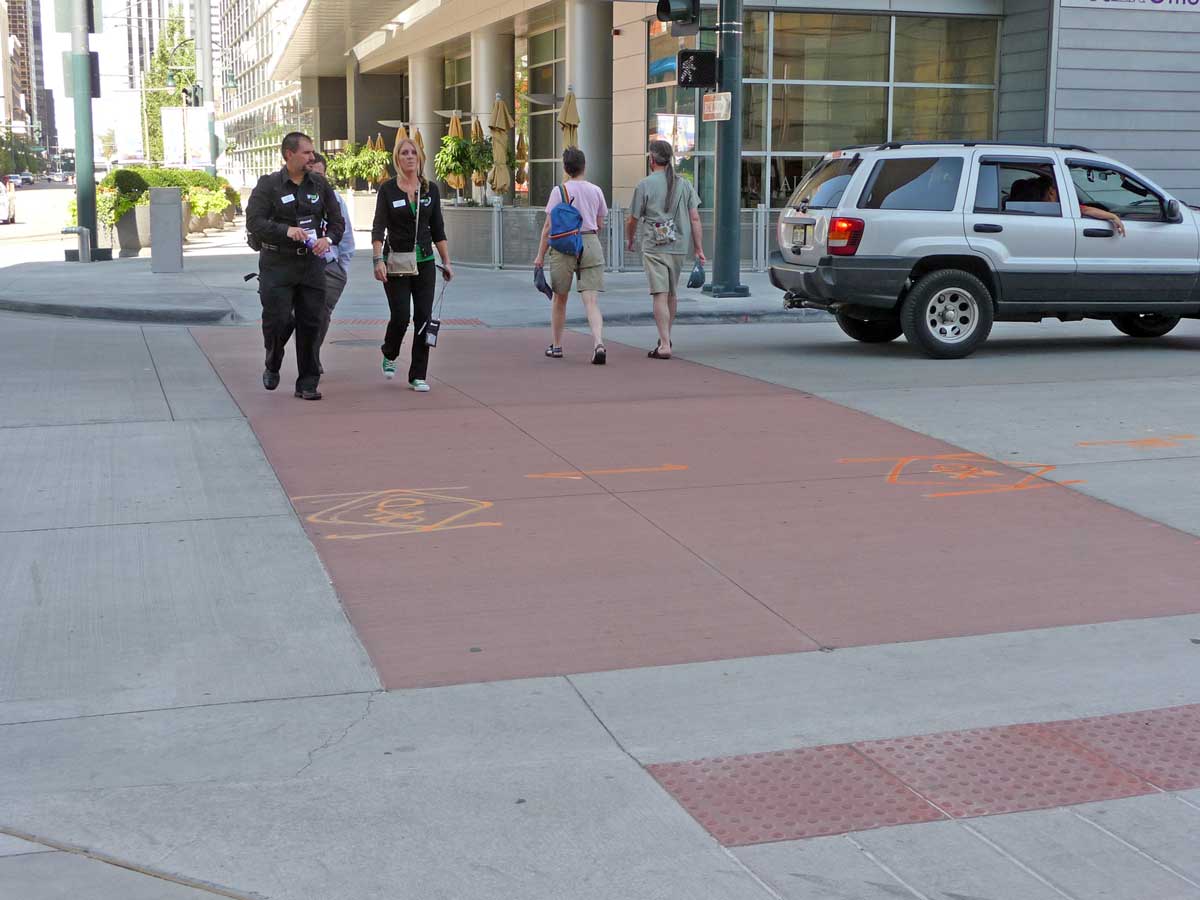 Left: Construction has now moved south of California Street. Here, the intersection of 14th and Welton begins its transformation.
Right: Work has also started at 14th and Tremont. The remaining intersections with 14th (Glenarm, Court, Cleveland, and Colfax) are all now under construction to some degree. 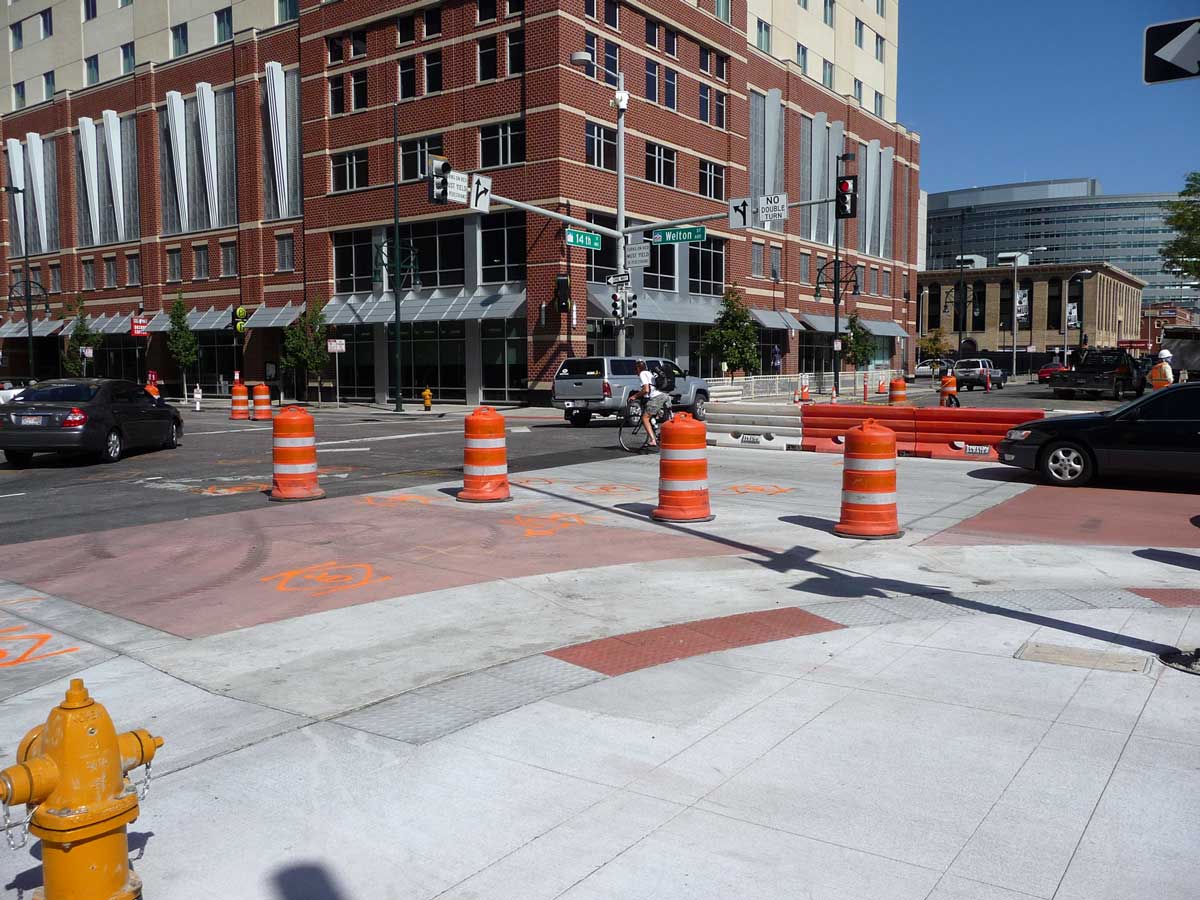 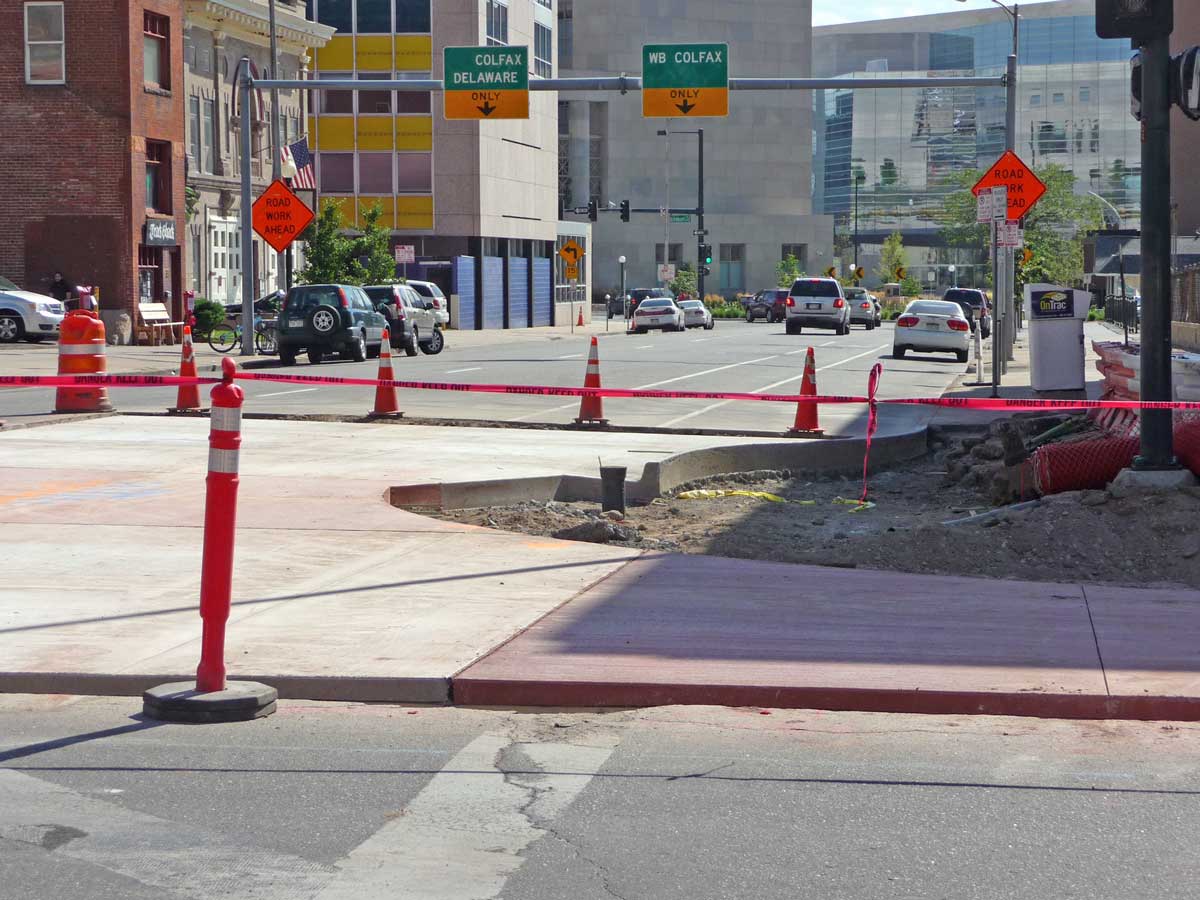 Finally, here are two bonus photos taken from far above. These images are courtesy of Ann Alexander Leggett with Concrete Works of Colorado.

Left: Block between Larimer and Lawrence.
Right: The 14th and Stout intersection 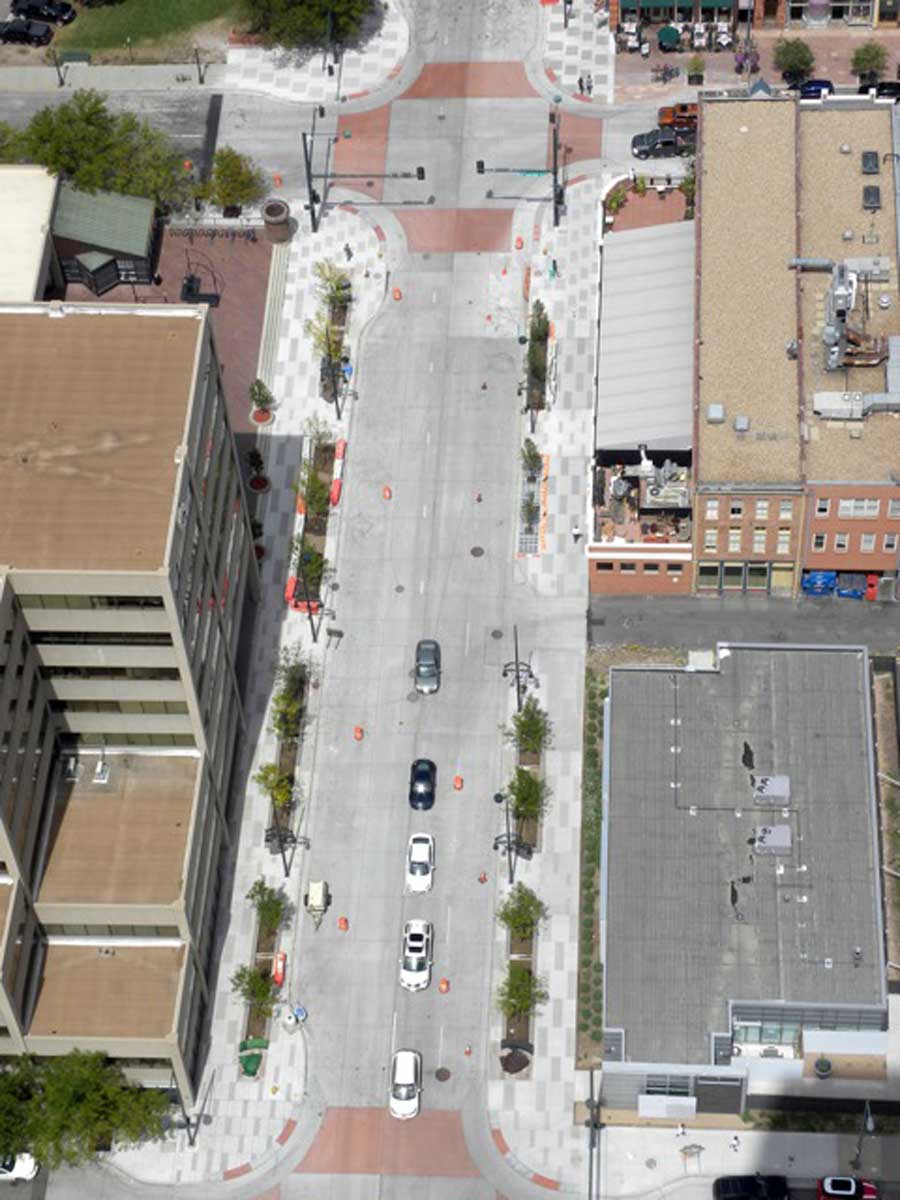 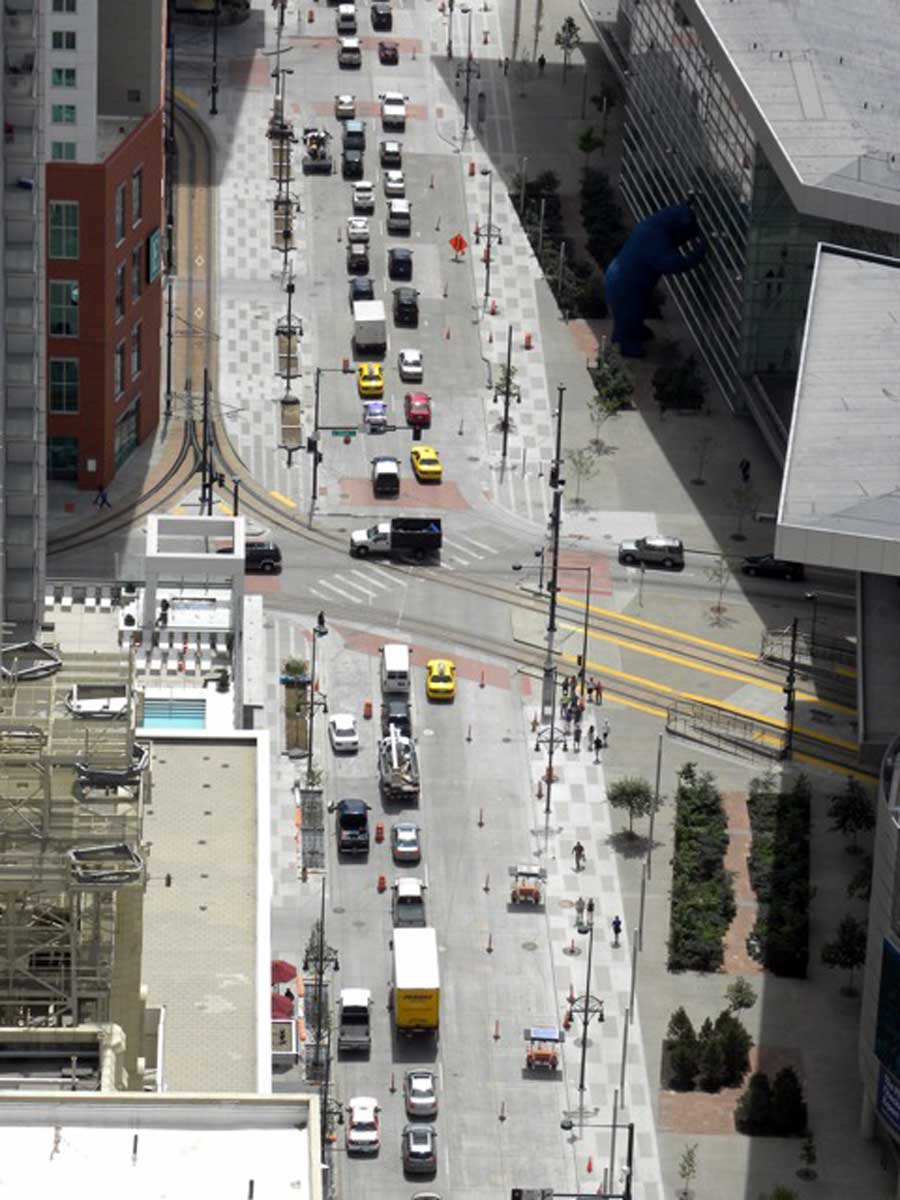 I’ll do a final 14th Street Initiative update later this fall when the project is completed.