Hello DenverUrbanism! Some of you may have read my periodic blog over at denverhistorytours.com, where I have covered the history of downtown’s built environment, both past and present, since 2007.  I am excited to add an important historic preservation element to DenverUrbanism now and in the future.

To that end, and in honor of the centennial of the groundbreaking for the wonderful Daniels and Fisher Department Store (D&F Tower) at 16th and Arapahoe, I thought I’d ressurect a couple items of note relating to that site.  The first one dates from the December 10th, 1910 issue of Denver Municipal Facts. 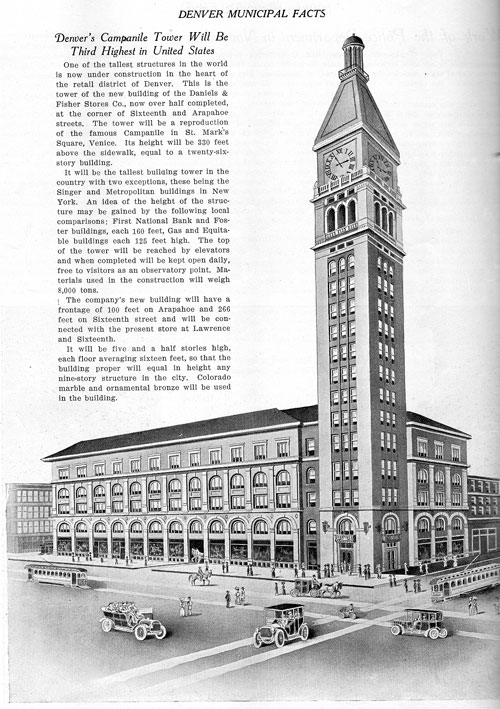 The Daniels and Fisher Store

Long-time Denverites cherish their memories of shopping at Daniels and Fisher until it merged with the May Company in 1957 (to make May D&F).  After that time, the clock literally began ticking on the utter destruction of our most historic core of central downtown.  While the Skyline Urban Renewal Project resulted in an area of shiny new buildings for Denver, it came at the expense of buildings we will never be able to replace.  That’s a subject for future blogs.  In the meantime, how did Denver let this happen, both pro and con.  How did we begin to develop a sense of preservation wherein the sentiment  of “saving” overcame the economic powers of “new is always better.”  While we cherish our Larimer Square today, for example, you might be surprised to learn how close we came to losing the D&F Tower in 1971.  In the 11th hour, this most beloved landmark was saved for another generation to admire.  This comic says it all: 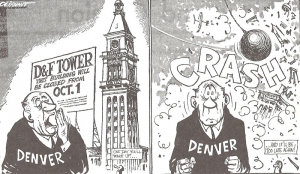 I look forward to continuing the conversation.